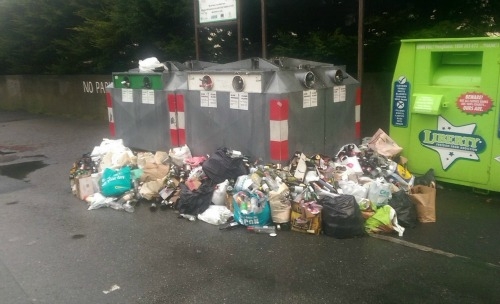 SOUTH Dublin County Council will pursue people who left boxes and bags of empty bottles at local bring banks over the Christmas period, despite the recycling facilities being full.

The excesses of Christmas have been evident at bring banks across the area of late, as people turn to their local recycling facilities to offload their empty bottles - and their Christmas partying evidence.

However, many of the bring banks have been fully loaded since before Christmas Day, with recyclers opting to leave their bags and boxes of empties on the ground beside the bring banks.

Residents have criticised the council for not scheduling additional bottle bank clear-outs in light of the holiday period, with others raising the unsightly look of recycling centres, many of which are located within communities, and the dangers associated with the presence of such high volumes of glass in neighbourhoods.

South Dublin County Council has a regional contract in place for the emptying of glass recycling banks.

According to the council, the service at glass recycling banks varies in relation to the level of need, with frequently used facilities generally emptied every three to five days.

A council spokeswoman told The Echo: “The operator is responsible for tidying up the surrounding area of the facilities and all litter and broken glass in the surrounding area, up to 5m away from the bottle bank, is collected – at the frequency set out in a list of bring banks.

“The general area around a bottle bank is also cleared on a regular basis by council staff with some of these areas being cleaned up to 3 times weekly.”

She added: “Increased use of these facilities can always be expected over the holiday period.

The council operates a number of surveillance mechanisms at certain recycling centres to reduce incidents of illegal dumping and littering, and to identify those responsible.

When asked if the council would be pursuing those who left boxes or bags of bottles at full bring banks over the Christmas, the council said: “The deposition of boxes, bags etc. at these locations at any time is littering and if we have substantiating evidence then yes, we will pursue.

“The council advises users that at any time, if bring banks are full, to take home their intended recyclables.

“The Council further emphasises that bags, boxes, cases or other similar receptacles for holding recyclables are not items that are ever accommodated at any of these facilities, and are major contributors to littering and illegal dumping at these locations.”

A number of bottle banks have been cleared in the area this week.