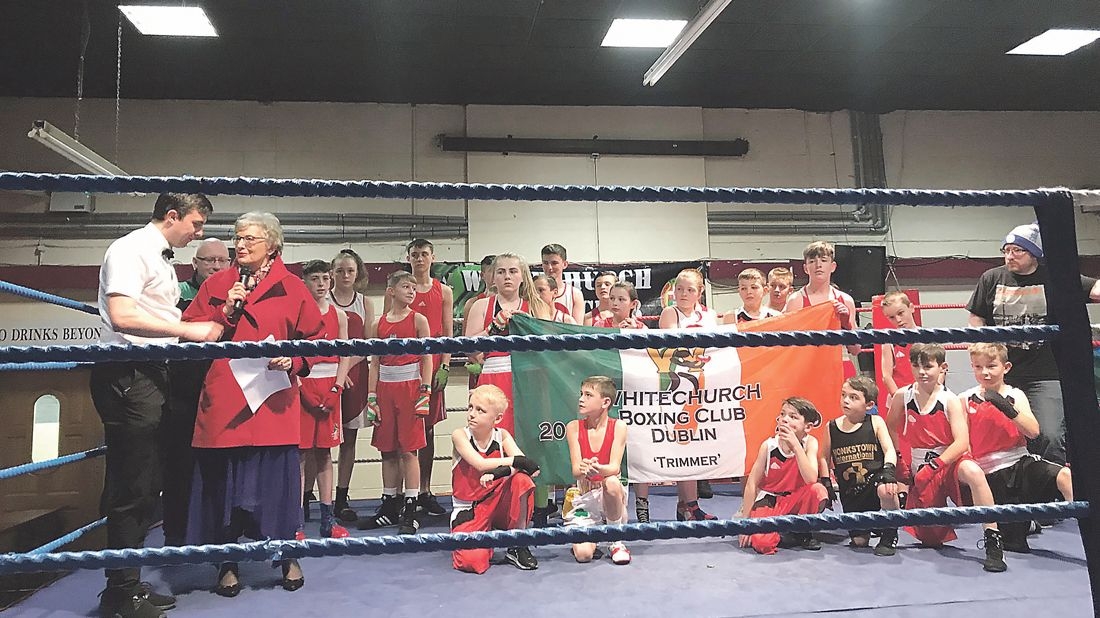 Boxing club at the heart of community needs a home

A COUNCILLOR is calling for Whitechurch Boxing Club in Rathfarnham to get “a permanent home”, following celebrations marking the club’s 10th anniversary.

For the last ten years the club has trained in the sports facilities in Scoil Mhuire National School in Ballyboden.

The club celebrated its 10th anniversary with a boxing match at the Ringside Club in the National Stadium in the city centre on Saturday, and Minister for Children and local Independent TD Katherine Zappone was in attendance at the event.

At the event, Minister Zappone outlined a number of the club’s achievements over the years, including 13 national titles, seven All-Ireland finalists, 18 Dublin titles, and 19 Dublin League titles, while in the ring with young boxers from the club.

Minister Zappone also told the crowd that boxing “has a special place” in her heart, as her father was a boxer, and added that she would support the club in securing their own permanent training facility.

Alan Edge, an Independent councillor for Firhouse-Bohernabreena, who was at the event, told The Echo: “The club has never had a permanent home, so they’ve been looking for ten years.

“They use the sports facilities in neighbouring Scoil Mhuire but it’s not sufficient for their needs, especially as the bulky equipment needs to be taken down and put away after each session.

“Whitechurch Boxing Club is, in many ways, the beating heart of the community.

“It has a wonderfully diverse membership and it’s a great example of people being brought together by sport.

“The parents volunteering to help out are drawn from all walks, and from both the settled and travelling communities.

“The club is a huge asset to the area, and that needs to be recognised by ensuring that they get the permanent home they so richly deserve.”

The club is currently in the process of trying to find a suitable site in the Whitechurch area, and following on from that they will try to secure funding to develop a permanent location for the club.

Whitechurch Boxing Club was founded in 2009 with the aim of “becoming one of the leading clubs in the country through the hard work and dedication of both our coaches and boxers”, and the club provides training for amateur boxers at both junior and senior level.