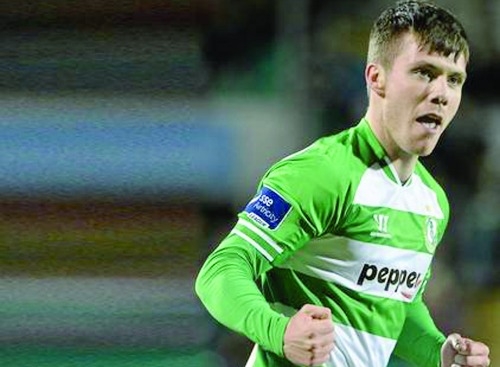 BRANDON Miele has every reason to smile when looking back on the season just gone.

The Tallaght man has proven one of Sham-rock Rovers stand-out performers since being signed up by Pat Fen-lon at the close of last year and was recently named the club’s Player of the Year.

A tremendous year with the Hoops has seen him named in the PFAI Team of the Year and nominated for the PFAI Young Player of the Year Award, the winner of which will be announced on November 20.

“It’s been a great season for me” Miele told The Echo. “Going from been so frustrated to getting in the team, being in the papers and then getting the Player of the Year award.

“I always believed in myself. When I came back [from Newcastle] I had to play Leinster Senior League but that was good for me.

“It toughened me up and got me more physically ready for the Airtricity League. I’ve worked my way into the team and got some goals.

Contracted to Rovers for another season, Miele will be hoping to help them build on their third-place finish in the Premier Division this year.

“We did hope that we could scrape into sec-ond place, but Cork got the win against Bohs and pipped us to it.

“But Pat [Fenlon] will look to strengthen up the team and we’ll give it a right go next season” he insisted.