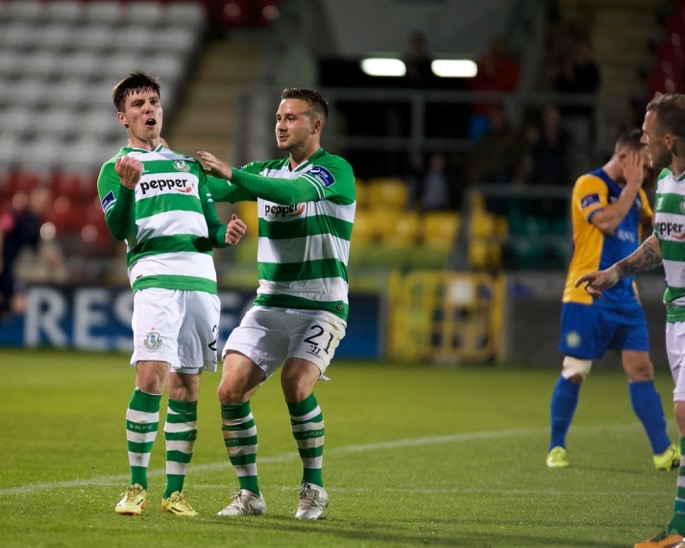 Shamrock Rovers confirmed on Thursday that Brandon Miele has extended his contract with the Hoops until the end of the next season.

Miele’s goal on Tuesday evening makes him the highest scoring Rovers midfielder in the league since John Toal 21 years ago.

Speaking about extending his contract the Tallaght native said: “I couldn’t be happier. This season has been great. For me to get in the team and have done what I have done, scoring 11 goals (in all competitions) has been brilliant.

“Hopefully I can keep it going for the rest of the season. I have probably been as happy as I’ve ever been playing football so I’m delighted to have signed up for next season. I hope the fans are happy as I certainly am.

“Next year hopefully I can continue with what I’ve been doing this season and we can get stronger and challenge for the league.”

The news surely comes as welcomed news to Pat Fenlon ahead of his side’s game with Galway on Friday, and Miele is hoping he will be lining out in Europe next year.

“Every game till the end of the season we are looking at wins and to get as many points as we can so we can finish as high as we can. We are hoping Cork slip up so that we can catch them and take second place.

“We are looking to keep winning where they have still a couple of difficult away games to play. We want to confirm Europe and get second place.

“It is massive for us to get to play in Europe. As a player you gain a lot from playing against high quality opposition so you really want to play in it.

“The fans really enjoy it and for the club that is where the money is so it means a lot to be playing in those competitions.”

If the Hoops can make it three wins out of three against Galway United this season with a victory on Friday it will go a long way to securing European football for Shamrock Rovers and for Brandon Miele in 2016.