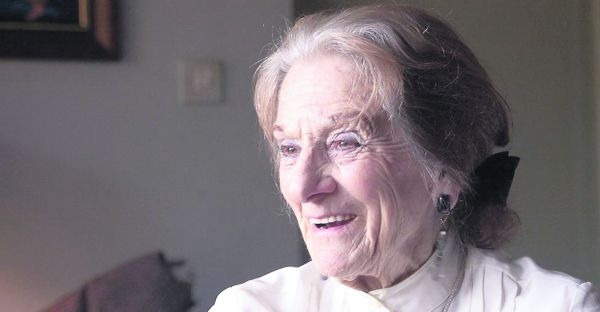 Celebrations for Ann’s 100th birthday with family and friends

A FAMILIAR face and name to many people in Tallaght, Ann Graham, marked her milestone 100th birthday this week with many family and friends who celebrated in her honour.

Known throughout Tallaght and St Aengus’ parish, Ann was born in South Africa and came to Tallaght from England over 40 years ago where she started her involvement with The Priory as a lay Dominican and became a member of the Tallaght Choral Society.

During her time in Tallaght, Ann became known as a talented artist and painted many portraits, and continued to cycle up until the age of 90.

Ann most recently moved to Parke House nursing home in Kilcock, but was joined by many friends from throughout Tallaght to celebrate her birthday this week.

Speaking to The Echo, Ann’s goddaughter Naoise Pye said: “Ann met my father over 40 years ago when she came to Tallaght. From there, she became a part of the family.

“Ann had a role as a nun when she was in England, and when she came to Tallaght she became involved with The Priory where she met many people including my father.

“Ann was so dedicated to The Priory and to her parish over the years. She was very involved in the arts and painted many people’s portraits over the years, and did a lot of calligraphy work for The Priory.

“At every family birthday, celebration and holiday Ann was there and she has always been very sociable and very accepting of people and easy to get along with, along with being a very intelligent and well-educated lady.

“We had a bit of a party on Sunday to celebrate her milestone birthday and today (Tuesday) we had her family over from England including her niece Liz Bowden.

“Everyone has been in great spirits, including Ann, and it’s been great having everyone together to celebrate.”