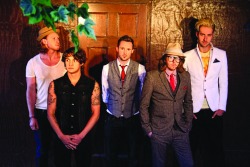 THERE’s always something inspiring about a hardworking band, who despite all the odds go that extra mile to get their sound heard, never turning their nose up at an opportunity to play.
Dublin-based rock band Keywest, which is made up of two Dublin and three British members, is no stranger to hard work and in response to the slow and saturated gig scene for a new band they took to busking on the city streets.
Honing their raw sound and style alfresco, the band quickly became known for their outdoor performances on Grafton Street and Shop Street in Galway – becoming one of the most played, current Irish bands on radio.
Down-to-earth and relevant, Keywest, who were named One to Watch by Hotpress in 2013, last year went global when a video of them jamming with a homeless Dublin rapper went viral – and most recently , they won the Best Busking gong at 98FM’s Best of Dublin awards.
Despite a busy schedule, bassist Sam took five to speak with The Echo.

How did the Keywest journey start?
I actually met the two Irish lads in the band randomly over in a bar in Keywest, Florida, and the banter was strong! We kept in touch via Facebook after. Many months later the band I was involved with in the USA reached its end and instead of heading home back to the UK I thought I would get straight back up on that horse and start in a new band with my Irish Facebook pals. I eventually managed to get two of my good friends from the UK Jimi and Harry over on the boat [to Dublin] to join the band.

You guys are regulars on Grafton Street, do you think the street makes for the best stage?
The street has been a great stage to showcase our music. Thinking that people stop in the tracks of their day to just stand and listen to you is lovely. I often found when starting out and playing in bars and pubs, to an audience drinking and chatting with their friends, that you just felt a part of the ambience of the room. When people stop on the street you know they have actually reacted to your music, it’s a very exciting feeling.

Busking has been good to Keywest, do you think hard work and thinking of different ways to get your music heard is vital?
Yeah, absolutely. Nowadays the music industry is a much more even playing field, the majority of artists can independently produce their own music to a professional quality, advertise themselves online and put a pro music video on Vevo etc. all without the help of a record label. With much more artists and talent working at this pro level from their bedroom studios any unique way to promote your music to jump ahead of the herd is gold dust and perhaps even vital.

You seem to have embraced social media as a band, how important is this for musicians today?
Social Media is incredibly important, we are all glued to our smart phones! Social media is great way to stay in touch with our fans and is our main way of keeping them in the loop of what’s going on for us. As an advertising tool for growing our fan base it kicks ass and is much more affordable and much better at targeting our demographic than any other more traditional advertising medium.

Cliché question – how would you describe your music? What or who inspires you as a band?
We take a lot of inspiration from a lot of bands, the musical taste in-between is vary varied. We look up to a lot to stadium acts like U2 and Coldplay.

Ideas for songs and lyrics, where do you pull them from?
Our singer Kav draws from his own experiences with the lyrics. He takes the music very personally, I think it’s a real sincerity in people’s lyrical writing that gives the songs that organic quality we are striving for at the moment. Often his songs are stories of love from the past or even just about the struggle of being a street artist in this crazy world.

If you could as a band record a track with any music legend, living or dead, who would that be and why?
I would love for us to work with Chris Martin of Coldplay. I think he is a unanimous hero of the band.

What are you up to at the moment, gigs, recording etc?
Right now we are polishing up our next album and hitting the summer festivals and making some big plans!

How do you see the remainder of 2015 playing out?
We will be finishing 2015 with a bang and we’ll be on our first Ireland AND UK tour, which coincides with the release of our next album Joyland.

Tickets for the Irish dates on Keywest’s tour are available from www.ticketmaster.ie and the UK dates www.ticketweb.co.uk. Follow the lads on Twitter, Facebook and at www.keywestofficial.com