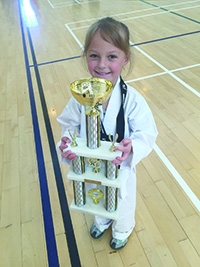 Supported by the Irish Taekwondo Union, the National Governing Body for WTF Taekwondo in Ireland, the event saw 250 players from Ireland and abroad compete in the first tournament in Ireland to utilise both electronic scoring body protectors, and electronic head protectors.

The head protectors are the ITU’s most recent investment in the development of taekwondo to align it with full scoring systems that will be used in Rio 2016.

The action-packed day saw grass root beginners share the mats with National Team players in a fantastic show of sports-manship and endeavour with competitors from the ages of five to 45 competing in all classes.

Nelly Magdziak, a member of SDTKD’s Taekwondo Tots programme, stepped up for her first competitive outing to medal in the -20kg Pee Wee division.

Red belt Leroy Dilandu excelled in his division with great tactical fighting placing him on the podium.

South Dublin were represented well by parents with Alan Nugent and Mario Malecka both winning silver and Justina Roj stealing the show in the Senior Ladies division in which she took gold.

“Our biggest victory of the day was the team effort and team work” stressed Coach and Tournament Coordinator Robert Taaffe.

“We had all available black belts contribute on a strong day of coaching and volunteering as officials. “

“Our parents were immense in assisting throughout to allow our members have a memorable team outing.’

In what was a very competitive fight for team trophies, Sport Taekwondo Ireland

At the conclusion of the event, SDTKD Coach Taaffe thanked the efforts of the diligent centre referees and corner judges for assisting with the tournament which was run efficiently.

This tournament is the start of a busy summer ahead for SDTKD as they continue to develop their squads from grass roots beginners up to international level.

They compete later in the month in technical competition in Northern Ireland before preparing for their summer grading and black belt grading.

For more info on the club log on to www.sd-tkd.com