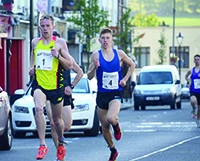 JOHN Travers has been named in the Ireland squad for the 2015 World University Games in Gwangju in South Korea from July 3-14.

The Donore Harriers AC star has been selected to contest both the 1500m and 10,000m events after achieving the qualifying standard in both distances.

Indeed Travers has enjoyed a tremendous year so far, the highlight being his seventh place finish in the 1500m at the European Indoor Championships in Prague.

Alongside this he has carded victories in the Tom Brennan Memorial 5km, the New Balance Invitational Mile in New York and the National Indoor 1500m.

What’s more he played a big part in helping Donore end a 15-year wait for the National Road Relay Championship crown after teaming up with Eric Keogh, Lee Van Haeften and Daragh Fitzgibbon to win the 43rd edition of the event in April.

And more recently the Drimnagh man recorded a new personal best of 29:04.66 for the 10,000m when he contested the Highgate 10km.