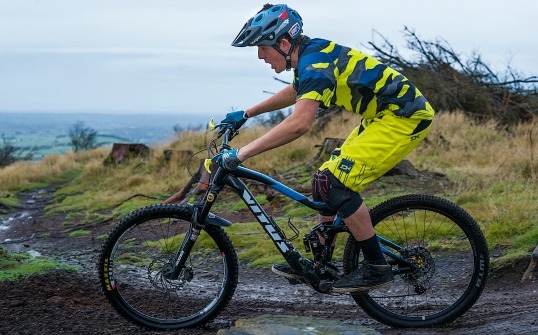 KILLIAN Callaghan has proven a huge success at most sporting activities he has turned his hand to.

A winner of no less than 10 Motorbike Trials titles- a sport in which he represented his country three times- the Walkinstown man switched to BMX competition and won the National Champ-ionships although he was unable to defend his title after a leg-break put him out of action for six months.

In 2014 he turned his attention to mountain-bike racing and, under manager Niall Davis, has already developed into one of the world’s top Under 21 competitors in this field.

The rapid rise of the 18-year-old is testament to his sheer commitment to a sport that demands so much in terms of time, energy and funding and, at one point, very nearly cost him his life.

Indeed a stunning third place finish in front of 10,000 spectators at the Enduro World Series in Wicklow back in May, came just eight months after he had collapsed in the closing round of the 2014 series, Finale Ligure, in Italy.

There he had been placed in an induced coma for three days after over-hydrating in extremely hot conditions and very nearly succumbing to a dangerous condition known as Hyponatremia.

Thankfully he pulled through, and was soon back training in a much more structured manner after opting to compete under the wing of former National Mountain Bike champion Davis whom Callaghan describes as “Mr Mountain biking in Ireland and the ultimate manager and mentor”.”

The move signalled the start of an adventure that would see him contest some of the sport’s biggest events in Europe this year on his new Vitus bike, finishing sixth in the Under 21 division of the Enduro World Series and second in the European equivalent while scooping the National Enduro and Gravity Ireland Enduro titles.

It was a truly phenomenal return for the young privateer who does not enjoy the backing of a factory team.

Nevertheless the influence of Davis was not long in telling this year as Callaghan emerged runner-up from the First Tracks Enduro Cup in Castlewellen in March before carding his first win of the season in Bigwood, Co Down less than two months later.

hen he finished third in that round of the Enduro World Series, and emerged the top Irish rider in his class.

“The biggest day of my life” recalled Callaghan who has enjoyed huge support from, among others, Ian Jackson, Hugh Arthur, Steve Nicholson and his mother Bernie who has driven him to events in Austria, Spain and Italy.

“The best riders in the world came to town, 10,000 screaming fans turned up and showed the World what Ireland can offer. It felt crazy getting on the podium and holding the Tricolour” he said.

By the time he had completed outings in Scotland, France, Spain and Italy, Callaghan had secured sixth place in the Under 21 class of the World Series- and all that after he had missed out on rounds in the United States, Canada and New Zealand due to a lack of funding.

He ended that campaign with a return to Ligure, the scene of his near-fatal outing the previous year, yet he successfully faced down his demons and carded a 12th place finish.

On top of all that he travelled to the UCI European Championships in Austria in June and there led the race until the very last stage when a berm collapsed into his gear mechanism and jammed his rear wheel.

It forced him to jump off and push his bike for almost a kilometre to the finish- his efforts earning him the runner-up spot.

The following month he lined out in the Mega Avalanche- a frenetic contest in the Alps that resulted in three of his friends being hospitalised.

Callaghan emerged the fastest Under 21 qualifier of the 3500 entries, but, after getting caught up in a major crash that ripped the chain off his bike, he had to settled for 14th position in his grade and 112th overall.

Heading into a winter of intense training, the Dubliner will be hoping to break into the top five of the World Series next year.

He is confident he can garner the necessary fund-ing to travel to the US and Canada next season, and should he gain the financial support he so thoroughly deserves, he may also line out in Argentina and Chile and really challenge for the global crown.