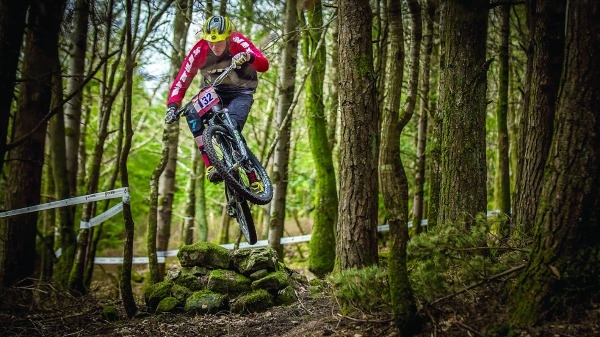 Callaghan gearing up for arrival of Enduro World Series

WALKINSTOWN mountain biker Killian Callaghan has opened his racing season with some impressive results since moving up to the Pro Men racing division.

Gearing up for the much-anticipated third round of the Enduro World Series in Wicklow on May 15 in which some 400 of the world’s elite mountain bike enduro riders will compete, Callaghan has settled in nicely with his new Vitus Factory team.

Indeed his first outing for them saw him record the fourth fastest time in the National Downhill Series in early March before he finished fifth in his Elite division debut at the opening round of the Munster Enduro series in Killaloe.

This was followed by a fourth place finish in the curtain raiser to the Welsh Enduro Championship, before he earned his first visit of the year to the podium after finishing third overall in the first round of the Vitus First Tracks Enduro series’ Pro Men category in Castlewellan Forest Park.

Ireland’s premier championship The Gravity Enduro Series was the next challenge with the opening race, run by the professional outfit Biking.ie, held in the local Three Rock Mountain.

Attracting 350 of the country’s very best Enduro riders, the event saw Callaghan shake off the effects of an untimely flu to record his maiden win as Vitus Factory Rider and his first visit to the top step of the Elite podium.

Clocking fastest times on the opening two stages of the day, he found himself locked in a tough battle with Belfast rider Keelan Grant before he eventually dug out an eight-second advantage on his way to an outstanding victory over the six stages.

This performance was followed up with a runner-up finish in the second round of the Munster Enduro Series in Cahir, Co Tipperary behind his cousin and full time factory rider, Greg Callaghan.

The confidence generated by these superb results, combined with the support now of Westpark Fitness and the dedicated training plan of his personal coach, the French-based Chris Kilmurray of Point 1 Athletic Development, has left him on a sound footing for the arrival of the Enduro World Series.

Callaghan missed the opening rounds held in Chile and Argentina due to lack of funding , however he has already shown, with his third place at the Wicklow venue in 2015, that he will be in contention for another top placing.