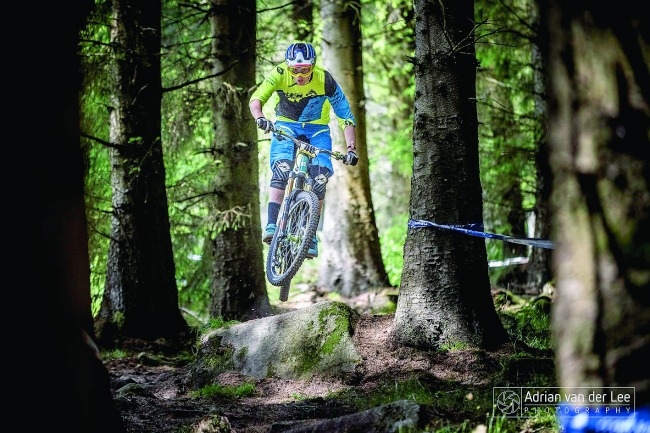 WHILE Ireland enjoyed the hottest temperatures of the year, teenager Killian Callaghan scorched to victory in the second round of the Gravity Ireland Enduro Series on Three Rock Mountain.

Up against EWS Pro Men‘s rider Dan Wolfe, the Walkinstown competitor knew he would have a battle on his hands especially as both riders were racing on home turf.

In the opening stage Wolfe had a fall and Callaghan took full advantage, posting the fastest time and throughout the following two stages, Wolfe had no answer to his teenage rival as Callaghan again posted the fastest times and held an 11-second lead at the halfway point.

Wolfe closed the gap on the fourth stage, but again Callaghan bounced back with a clear four-second advantage on Stage Five.

With the final spectator stage finishing alongside the race village, the jump section is known to be a real crowd pleaser.

Both riders were the last to tackle the forestry stage, with Wolfe keeping his bike low on the jump section while, urged on by the spectators and using his BMX experience, Callaghan was the only rider to clear the 15-foot tree root gap jump.

Only half a second separated the two on the final stage although Callaghan took the overall victory a clear 10 seconds ahead of Wolfe.

This feat moves Callaghan up to the joint leader position in the Gravity Enduro Pro Men Series with Wolfe.

He will now be turning his attention back to the Enduro World Series with a trip to Millau, France for the fifth round coming up in less than two week’s time.