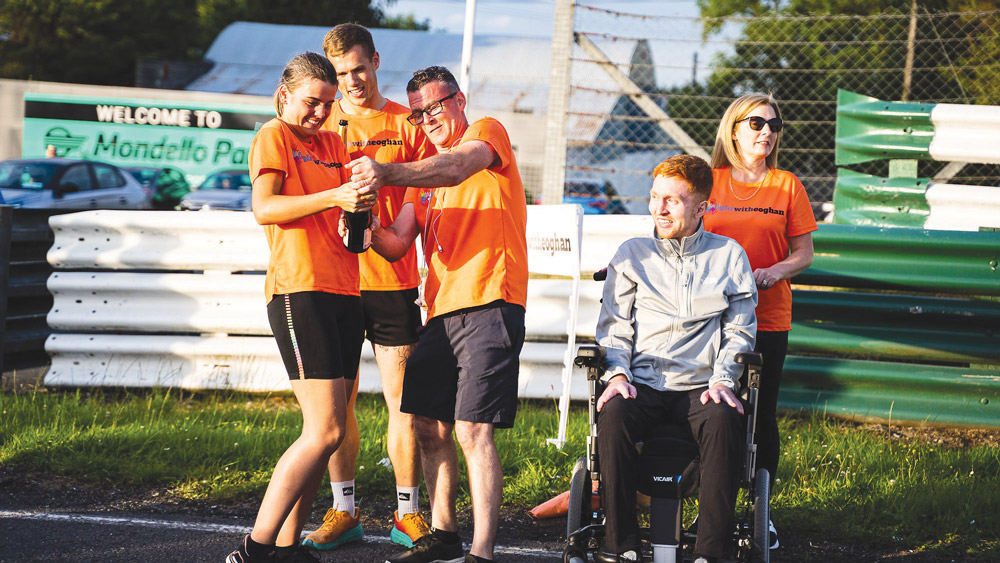 Eoghan with his girlfriend Saoirse O’Neill, his friend Sean Morrissey, and his parents Dean and Tanya in Mondello Park. Photos by Ciarán Watts from @WattsMediaIrl

OVER €30,000 has been raised for the family of a young Clondalkin man who was left paralysed from the neck down after a mountain-biking accident last year.

The money was raised as a result of two events in Kildare a fortnight ago, for adaptations to be carried out in 23-year-old Eoghan Gorman’s home.

Eoghan, a Greenpark native and popular sportsman, suffered his life-changing injury in the Dublin Mountains on Sunday, October 3 last year when he came off his bike coming down a trail.

The young man, who is a past pupil of Sacred Heart School in Sruleen and Holy Family Community School in Rathcoole, fractured his C3 vertebrae on his spine – one of the most severe spinal-cord injuries.

Unable to breathe independently, he was placed on a ventilator.

In recent months, Eoghan has been able to come off the ventilator and is able to breathe unassisted, but is paralysed from the neck down.

A team of friends of the Gorman family set up a campaign earlier this year, called Fight with Eoghan, to raise funds for when Eoghan leaves the rehab centre, to get an adapted house to accommodate his needs.

The Gorman family are planning to move into Eoghan’s grandmother’s house in Rathcoole, as it is larger than the family’s Clondalkin home and would be a more suitable property to adapt for him.

A 5k walk, jog and run event was held in Mondello Park on July 14 – at which over 400 people attended – and a classic car show, fun day and auction was held in Straffan on July 16, with over 2,000 people attending, all in aid of Eoghan’s fundraiser for adaptations to his new home.

Eoghan’s dad, Dean, told The Echo that approximately €30,000 was raised as a result of the two events, which will be added to the €131,000 fundraised so far by Fight with Eoghan.When asked about how his son is, Dean said: “Eoghan’s in good form, he’s in good spirits. Going to the fundraisers was very tiring for him, it was a busy weekend.”

Eoghan’s mam, Tanya added: “He’s blown away by the whole thing. The support that’s come out for Eoghan and for us, it’s unbelievable.”

Dean continued: “This is the easy part, because Eoghan is being looked after in rehab, but when he’s out, that’s when we’ll need the help.

“Just getting him home is our aim. He’s in the rehab, but there’s very little that can be done for him there now.

“He’s a 23-year-old fella. He’s bored in there, and he needs to be with his family and his girlfriend Saoirse.

“He needs to get out and start living the new life he has.”

Before his accident, Eoghan was a keen sportsman who practiced taekwondo, MMA and kickboxing, and Tanya said she believes her son’s experience in sports is a key part of his resilience.

“It’s down to sport, sport has gotten him through this,” she said. “It’s given him his drive and determination. He had his taekwondo, kickboxing, and MMA friends behind him in Mondello.

“To see them standing behind him, it meant a lot to us.”

Dean and Tanya said they want their son to return home as soon as possible, and the donations they’ve received will enable them to do that.

“At this stage we’re hoping to get him into the house for Christmas, so he doesn’t have to spend another Christmas in hospital,” said Dean.

Reflecting on the generosity of people who have donated to the campaign, Tanya said: “We want to thank everyone from the bottom of our hearts, we’re so grateful.

“We can never thank them enough.”

The Gormans said they’re planning to hold more fundraising events later in the year. In the meantime, donations are still being accepted on the ‘Fight with Eoghan’ GoFundMe page.