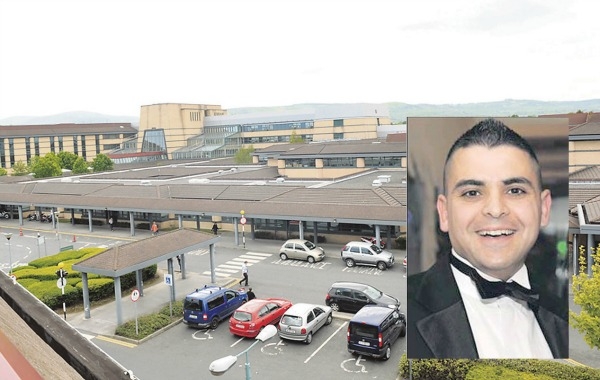 Cancellation of surgical operations by hospital system labelled ‘a joke’

Derek Bosonnett, originally from Kilnamanagh, was due to undergo a minor surgery on Friday (January 22) on a broken nose which has been causing him breathing problems for a number of years.

He was told his surgery was cancelled on Thursday, 17 hours before he was due to undergo the procedure, and following weeks of preparation and planning which saw him take two weeks holidays from his job as a retail manager.

Derek told The Echo: “My surgery is small compared to others, but I’ve had major problems with my breathing because I also have asthma.

“There have been times I have woken up in the night gasping for air and it’s just getting worse.

“From start to finish I’ve been waiting five years for this surgery, and I’ve made hundreds of phone calls and been pawned off to specialist after specialist.

“It was only after I was referred to the Beacon Hospital because of the waiting list was I told I need surgery and referred back to Tallaght Hospital.

“I was given 17-and-a-half hours notice before my surgery that it was cancelled.

“I finished work at 2pm on Thursday, and by 2.30pm I had a phone call cancelling my surgery for Friday morning.

“I’ve been five years waiting for this surgery. I’m 32 years of age with two small kids under two, and I was due to move house on Friday, but that has had to be moved because now I’m due to have surgery this Friday.

“I work in retail and our rota is given four to six weeks in advance so I’ve had to take the two weeks off.

“It has affected my whole family and friends who were taking time off their jobs to give me a lift to and from the hospital.

“The whole system is a joke, and it hasn’t changed in 10 years. It’s a problem with the system.

“The management of the hospital and the decisions that are made. In this day and age it’s unbelievable, it’s a shambles.

“They’re making false numbers, it was the same with jobseekers benefits a few years ago.

“I said to the hospital, what if I hadn’t turned up last Friday for my surgery if it went ahead? I would have had letters and phone calls, but they can just cancel on patients how they please.”

Following the cancellation, Derek got in touch with Sinn Féin TD Sean Crowe, who has blasted the health system after hearing of Derek’s story.

Deputy Crowe told The Echo: “On Tuesday this week 517 people were on trolleys in hospitals across the country.

“Surely something is also wrong when a system can’t tell until you turn up, literally at the last minute, that morning, that there is no bed assigned, no surgery available and it has no idea when your life-changing surgery might go ahead.

“It filters through the whole hospital. There are people in a lot of pain, staying on medication that have been overlooked because they are not on trolleys.”

A spokesperson for Tallaght Hospital said: “Tallaght Hospital, like other acute hospitals, is experiencing increased emerg-ency departments attendances with a 10 per cent increase in emergency admissions.

“The hospital has implemented a number of projects aimed at reducing patients’ length of stay and avoiding admissions, which has seen a 20 per cent decrease in the number of patients’ trolleys in the ED.

“However on a small number of occasions the demand for beds has exceeded capacity which resulted in patients being cancelled.

“These cancellations are a last resort and as a result can be at short notice which the hospital recognises is upsetting for patients.

“The hospital apologises for this and for the inconvenience to patients and their families. All cancelled patients have been prioritised and rescheduled for admission in the coming weeks. In addition the hospital met the HSE 18-month schedule care target for its waiting lists at the end of 2015.”