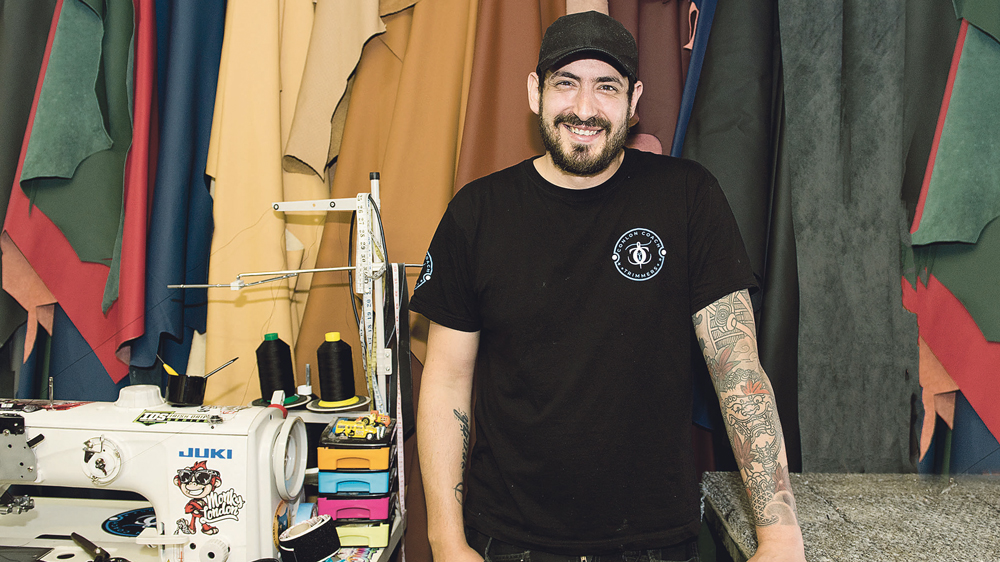 Carl Conlon at his base in Cookstown

A BUSINESS specialising in all aspects of automotive upholstery and convertible tops has seen a doubling of orders every year since launching in 2019. It now has plans to expand in the near future.

Conlon Coach Trimmers, based in Cookstown, is owned by Carl Conlon who set up the business in February 2019.

The firm upholsters anything inside of cars from the seats, to dashboards and carpets.

“I was working for other companies in the same sector, so I was passionate about cars and knew there was a market, be it small, in Ireland, with friends and friends of friends asking me to do things in their cars,” explains Carl.

“I had a couple of guys asking me to do show cars and it was kind of working at the time, so I decided to go ‘hell for leather’ with it.”

“I don’t only do cars – I have done a helicopter as well and boats. It’s all automotive upholstery. I have a [Porsche] 911 in here at the moment which came in with all old leather seats and carpet, so I just ripped everything apart completely to nothing, designed it and stitched it all up in a sewing machine and it looks brand new,” said Carl.

Despite starting the business just a year before the Covid-19 pandemic hit in February 2019, Carl says the work hasn’t slowed down.

“The pandemic did hit but I did have a lot of work in. With cars such as the [Porsche] 911, some of the interiors can take anywhere from 80 to 300 hours to complete, so it does take a lot of time.”

When Carl first started the business, he explains that he used somewhat unconventional advertising methods that still stand to him.

“When I started first, I didn’t advertise, it was just word of mouth so I was going around and anybody that had a nice car I would give them a business card,” he explains.

“The show cars that I did for friends were placed really high in shows and then their friends wanted work done, so it worked like that, slowly building up a good reputation.”

Carl explains that while he had the passion and skills for the business, he needed guidance when it came to certain aspects of running a company, so he turned to the Local Enterprise Office (LEO) in Tallaght for support.

“When I first went into business, I didn’t have a great understanding of some things for the business, so I did the LEO start-your-own-business course on the March that I started and it taught me about things such as accountants, bookkeeping, advertising – all the important things and skills you need to know.

“If I hadn’t done that course, I wouldn’t have known that I needed to get an accountant or even something as simple as doing my income tax at the end of the year and understanding it – 100 per cent if I hadn’t gone there, I would be a fish out of water.”

Currently based in a small workshop in Cookstown Industrial Estate, Carl says he is looking for a larger space and hopes to hire staff as the company continues to grow and

“I’ve a tiny little space in Cookstown but I have to be out of here by November, I have almost it guaranteed that I have found a place on the Blessington Road.

“The idea is when I get into this new premises to get more people in because I am currently booked up until March/April next year and it’s great.”

When asked what advice he would give to anyone looking to start their own business, Carl says “to not be afraid and just go for it 100 per cent.”

“At the start I was afraid to go out on my own and now I am afraid to expand – there’s always these little steps and hurdles you are scared to cross, but it is definitely worth it when you

You can find out more information or get in contact with Conlon Coach Trimmers through Instagram at conlon_coach_trimmers.