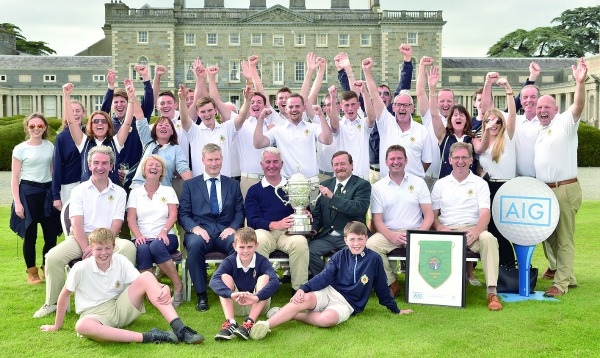 IT WAS A case of third time lucky for Castle Golf Club in AIG Junior Cup Final after they beat Lurgan in the decider to raise the prize for the very first time at Carton House last week.

Having fallen at the last hurdle back in 2006 and again in 2014, the club has experienced enough All-Ireland heartbreak in this competition especially having captured the Leinster Junior Cup title on six occasions – five of them coming in the last 11 years.

This year they had to negotiate a tough All-Ireland semi final against Tralee 3/2 with Paul Whelan clinching the win for the Dubliners on the 19th after Harry Gleeson and Tommy Smyth had notched up wins in their games.

It set them up for a mouthwatering decider against a Lurgan side who had come through their respective semi-final as convincing 4/1 winners over Athenry.

In the final the two sides were deadlocked after Gleeson and Fergal Moran carded wins for Castle while Keith Percy and Gareth Hanna had done likewise for Lurgan.

It meant the prospects of Castle’s first win in this competition rested firmly on the shoulders of 15-year-old Tommy Smyth, who had incidentally opted not to open the envelope containing his Junior Certificate results until after the close of the All-Ireland.

That decision was to prove a wise one as he remained totally focused in his decisive match against Lurgan’s Andrew Cummins, which culmin-ated in a superb 15-foot putt on the 17th to secure a 2&1 win and, with it, the coveted prize for his club.

It was an amazing week for Castle who went so close to achieving an AIG Senior and Junior Cup double that has only been done twice and not since way back in 1933.

But unfortunately for the Castle seniors, they came undone in their decider against Sligo, losing out 3-2 in Carton House on Saturday.

This Castle team had secured their place in the decider after wins for Gleeson, Mulready and Holland had seen them surmount the challenge of Shandon Park 3-2.

But the week belonged to the Castle Juniors who were able to finally bring home the ‘Holy Grail’ to their club.

“There were stand-out performances right across the board” said Barry McConville who, together with Fergal Walsh, managed the team. “It was just absolutely fantastic.

“The players have put in an extraordinary amount of work right from the beginning of the year.

“This started back in November and we started getting together every Sunday from February.

“The lads were truly determined to go as far as they could in the competition and it was great to see them do it.

“It’s been a really special year for the club” McConville told The Echo.

The hunt for All-Ireland honours continues next weekend for Castle as their junior ladies gear up to face Roscommon in the semi finals in Dundalk.