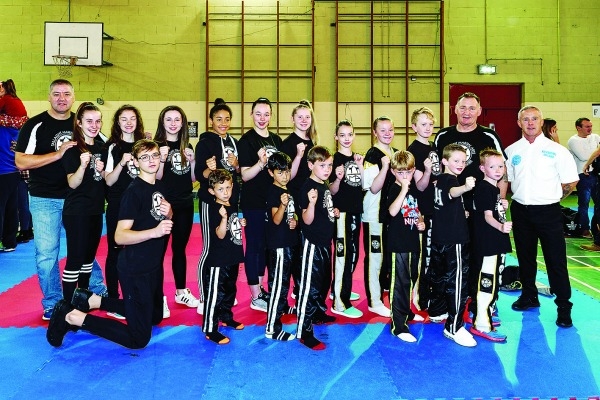 Indeed more than 450 competitors from all over Ireland lined out in forms, kata, patterns, points fighting and light contact.

Tallaght Martial Arts fighters dominated the Under 15 and 17 years points fighting section with Jodie Browne winning both sections in which she met clubmate Eadaoin McCrave in both finals, the latter also finishing third the light contact.

Adam Condon topped the Under 17-years Points Fighting as did Conor Mc Glinchey in the -75kg Mens Advanced section in which clubmate David Harris finished third.

Louis McGlinchey put in a very strong performance in the kata section to take third place before Zara Jones emerged runner-up at Under 13 years as did Joe Dolan fighting in the Veterans section.

Blessington Martial Arts had a number of fighters competing with Shauna Fitzpatrick second in the Under 13 Year’s Points Fighting Novice category.

Black Panthers Kickboxing Club also made their presence felt at this event.

Evan Kelly won two fights on his way to the Novice Under 13 title before Micheal Mongan picked up silver in the Advanced age 17 category.

Eddie Mongan, lining out in Advanced 13 age and under, emerged third – a fine achievement given that he was competing after a long spell out of competition.
Taking part in his first competition, novice Jordie Baleuza Musodi turned in a fantastic performance to earn gold in the Age 17 and under category after only eight months in training at Black Panthers.

On another note, next up for Tallaght Martial Arts fighters is the Flanders Open in Belgium this weekend and the Rumble in Citywest on October 9.

The club is now enrolling both junior and senior students and those interested can check out the website tallaghtmartialarts.com for class times.