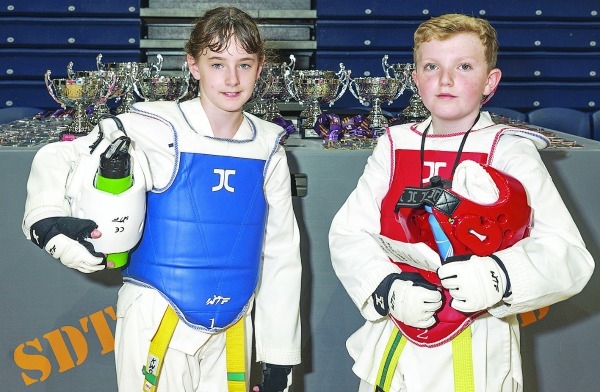 The two-day event hosted by Tallaght’s ‘South Dublin Taekwondo [SDTKD] was supported by Fáilte Ireland, South Dublin Council and the Korean Embassy in Ireland and saw 265 fighters take to the mats for sparring on Saturday with some 200 entries in all divisions for Sunday’s technical ‘Poomsae’ competition.

The annual event catered for all with divisions from pee-wee to veteran with competition in all aspects of taekwondo discipline including sparring, patterns, pairs patterns, team patterns, freestyle and para divisions.

Local clubs Eire Taekwondo [Aylsbury], Clondalkin Taekwondo, and SDTKD [Tallaght Leisure Centre] were among those in action with each club enjoying their share of success.

Abby Gorman from Clondalkin TKD picked up bronze in sparring and a silver in poomsae, while clubmates Grace Gorman and Isabel McIntyre both went third on the podium in poomsae.

Eire Taekwondo, who run a club in Aylesbury, saw two of their athletes, Ndjatang Bibong and Sam Wheeldon perform superbly in the -68kg Junior category, winning gold and silver respectively.

In all, ETA fielded 10 players on Saturday and came away with two gold, four silver and bronze while on Sunday they had four members involved resulting in one silver.

Hosts SDTKD fielded a substantial team in support of their home event and boasted some excellent performances by the Rena family.

Kim Rena picked up a tremendous three golds throughout the event in sparring, poomsae, and pairs with her younger brother Jed, who, likewise, took three golds along with a silver in sparring.

Their younger sister Liana Rena made her competitive debut event and wowed the crowd in her first-ever match, winning 8-3 against her opponent from England.

That impressive display carried her into the semis where she won 5-4 before eventually finishing with silver.

She, however, went one step better on that the following day, securing gold in the poomsae event.

At the higher end of the spectrum, local Jack Woolley followed team direction and stayed home for the event rather than attend the Polish Open World Ranking Event..

He took home the gold in the Senior -58kg division on Day One, and followed that up with a clean sweep winning golds in all his other divisions; poomsae, pairs with his team mate Jamilah Depakakibo, and three-man team with SDTKD coaches Dylan Leonard and Anas Belmaati.

Among the highlights over the weekend was a visit from the Korean Ambassador to Ireland Mr. Kang-il Hu.

“This is the fourth year running that the Embassy of Korea in Ireland has supported the event, and their contribution has done so much for taekwondo in Ireland, allowing us to improve our competitions and standard of athletes” stressed Tournament Coordinator and SDTKD Coach Robert Taaffe.

The two-day event was rounded off with a final awards ceremony that saw titles go to; Extreme from Northern Ireland (third-place sparring team), Champion (second) and South Dublin TWD (first).

Local coach Brendan Ryan of Clondalkin Taekwondo was awarded ‘Best Poomsae Official’ of the tournament and the final award of Grand Champion was given to Woolley who topped the podium in all of his divisions.

“A lot of hard work was put into this event by a lot of people and I am so grateful of the assistance from all” said Taaffe.

“We were delighted to put on a show that is one step closer to the ranking events around the world our members usually have to travel to.

‘We are delighted we could be involved in a SDCC project which is intended to bring comm-unities together through a community tourism initia-tive for the diaspora. this event is in partnership with South Dublin County Council, Fáilte Ireland and IPB Insurance” he added.