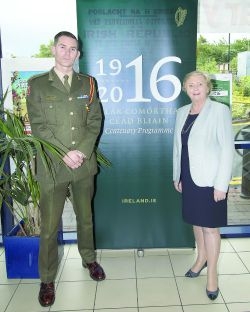 THE final Ireland 2016 commemoration workshop took place in Lucan Library last Tuesday evening with representatives from across the county present.

Voluntary groups and organisations gathered to find out how they can play their part in the Ireland 2016 Centenary Programme.
The workshops were designed to help local people find out more about the plans to mark the centenary of 1916 and allow groups to contribute to the plans.

With Deputy Mayor Cllr Guss O’Connell opening the event, Minister for Justice and Equality Frances Fitzgerald was also in attendance, as well as representatives from the Ireland 2016 Office at the Department of Arts, Heritage and the Gaelteacht.
Deputy Mayor O’Connell said: “I am delighted to say that South Dublin’s Commemorations Committee has carried out extensive consultations to ensure the development of a programme of events for 2016 that captures the ideas and contributions of people of all ages and from all areas in South Dublin County.”
A key part of the celebration is community participation and representatives from the council were very pleased to see so many people want to get involved.
Lorna Maxwell, Director of Services with the council, said: “The attendance of so many people is a testament to how the Centenary Programme has really captured the imagination of the citizens of South Dublin County. We want to develop a year-long programme of events in which everyone is invited to participate.
The council is seeking people with ideas for the celebrations from a range of different backgrounds – including history and heritage, sporting organisations, arts and cultural groups, voluntary organisations and youth groups.
Ms Maxwell also revealed that the Commemoration’s Fund – a fund for local groups and organisations to develop a project to make the centenary – has been extended.
Funding of €40,000 is available for those who wish to organise events as part of the centenary programme and application forms are available from www.sdcc.ie.