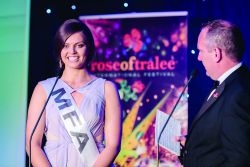 DUBLIN will be well represented in this year’s Rose of Tralee competition as Rathcoole native Aisling Finnegan has been chosen to represent the city at the festival.

Aisling works as a physiotherapist and Pilates instructor with First Physio Plus in Clondalkin, and as a sports physiotherapist with Peamount Ladies Team, Round Towers GAA Club and Naas Rugby Club.

Since the selection process three weeks ago, Aisling has been preparing for the Rose of Tralee festival, which will take place in Tralee from August 14 to 18.
Speaking to The Echo, Aisling said: “To be honest, I still can’t get over the fact I was chosen. It all happened really fast.
“There has been so much support from my friends – the house is covered with cards. There’s been so many well-wishes from people in the community centre, and An Poitín Stil is sponsoring me in the competition.
“The Rose of Tralee was something that I would watch with my family as I was growing up. One of my friends asked me would I be interested, but at first I wasn’t sure. I went along to one of the meetings and it’s been so much fun since.
“I was only chosen three weeks ago, so this is only the start of it. There’s a lot of events coming up in the next year and I’d like to become an ambassador for a charity and hold some fundraisers.”
As the Dublin Rose, Aisling automatically enters the competition as an International Rose and is looking forward to getting to know all of the other Roses that have been selected for the competition.
Aisling said: “We’ve had a few nights out, and I’m getting to know the girls. I’m off now on Sunday for two weeks for the festival.
“I don’t really have time to feel nervous about it, I haven’t really had a chance to sit down and think about it.
“Someone mentioned to me that 1.2 million people will watch the Rose of Tralee, which is a lot. It’ll hit me that it’s real when they show my family, that’s what I always remember from watching. That’s a big deal.”
“There are 20 outfits overall, so there’s been loads of shopping and my dresses have been sponsored by Folkster, a shop in town. My sister and mam have also been so good.
“In my role as a physiotherapist I’m normally in tracksuits, so it’s a change!”