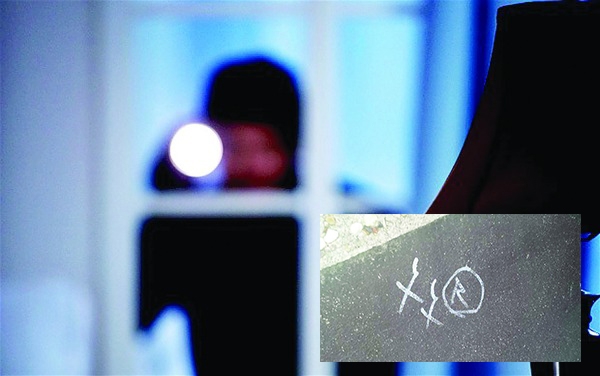 Chalk marks thought to be codes for thieves

SIGHTINGS of chalk markings outside homes in Tallaght and Clondalkin are believed to be code between burglars as to whether a property is worth robbing or not.

In recent weeks, a number of residents have raised concerns over chalk markings outside their homes, which many believe are left by the recon units of criminal gangs who are sent out to scout estates.

It is also believed that there are specific markings for houses that have a thoroughbred dog on the premises, a code used by gangs that steal dogs to order.

Images of local markings have been generating hype online, with many residents believing they are criminal code and others suggesting they could have been left by utility companies.

In 2013, concerns around chalk code communication between criminals hit the headlines, with a number of national media outlets publishing a list of the symbols and what they meant – a list described as the “Da Pinchi Code” by Muintir na Tire’s national co-ordinator for community alert, Liam Kelly.

The list of codes published at the time highlighted the different chalk symbols for ‘alarmed house’, ‘good target’, ‘nothing worth stealing’, ‘too risky’, ‘wealthy’, vulnerable woman’ and ‘already being burgled’.

When contacted by The Echo, Tallaght Superintendent Peter Duff said: “We can’t confirm or deny that these marking are made by criminals.

“I am not saying that it doesn’t happen, but we have no proof to suggest that any of the reported local markings have been left by burglars.

“A lot of burglaries are opportunistic, criminals see valuables on display or find a window or back door open.

“However, if people spot unusual chalk markings outside their home, I would encourage them to contact their local Garda station, and don’t wash them off until we can get an image.

“We need people to report these markings, putting pictures of them up on Facebook does not help the Gardaí in building intelligence, so we would ask that people report them.”

When asked about the list of symbols released, he said: “There have been sightings of these markings right across the country and some have been common and some are new.

“In general at this time of the year with the dark evenings and Christmas approaching, criminals are out and about watching homes.

“We’d ask people to ensure that they lock their home securely, never leave anything of value on sight or hold large amounts of cash in the home.”

Anybody with any questions on home security can contact Tallaght’s Crime Prevention Officer on 6666000.