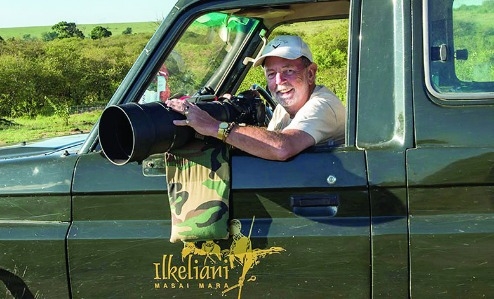 AN AWARD-winning photographer who last year defied death has started a bucket list, and this week he ticked off his number one challenge with a photographic expedition to Kenya.

However, against all the odds, and with a survival rate of one per cent, Micheal pulled through, after spending five weeks in a coma.

He told The Echo: “Although I was told my recovery would take at least two years, I was determined to get back to as normal a life as possible, and I continued a modified version of the cardiac rehab programme I did at Tallaght Hospital at home.

“During my recovery I started a bucket list and top of the list was a wildlife photographic safari to Kenya’s Maasai Mara.

“Despite being advised to wait at least another year before attempting such a difficult task, particularly alone, I refused to be deterred and on October 28 I headed off on another life-changing event in a year of life-changing events.”

He added: “It was such a memorable trip and I was amazed at the reaction of members of the public to videos I uploaded onto Facebook daily – one video got more than 1,000 views.

“I also plan to write a book about my bucket list, and the pictures taken in Maasai Mara will be part of that publication and a photographic exhibition.

“This was an expensive trip and one that I will be paying for for a long time.

“However, I basically came back from the dead and if that experience teaches you anything, it’s to make the most of your life, you only have one.”

Living in Aylesbury, Micheal has a number of wildlife books under his belt and award-winning photographs.

He hopes to release a photographic book on the journey his bucket list takes him on in 2017.
For further information follow Micheal on Facebook or www.michealfinnphotography.com