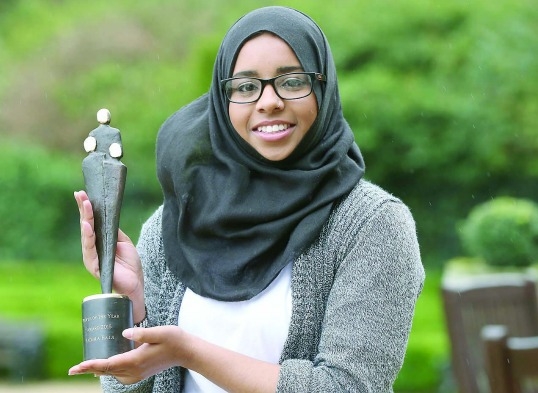 A CHAMPION of diversity from Tallaght was honoured last weekend at the 2015 People of the Year awards for her work with creating Diverse City FC and for her role as a youth leader for Sports Against Racism Ireland (SARI).

Eighteen-year-old Fadhila Hajji, who was formerly a student with St Mark’s CS, established Diverse City FC with the help of her brother, Abdul.

Since establishing the team, she has become a youth leader for Sports Against Racism Ireland and has been travelling around the country to educate children about the importance of diversity and the negativity of racism and discrimination.

Speaking about Fadhila, the co-founder of SARI Ken McCue said: “Fadhila is the real inspiration behind this [Diversity FC]. The team was originally set up to encourage young women from a Muslim background into sport.

“It’s open now to all girls and women right across the board. It brings them out of their shell, it helps them build confidence and then they’re becoming coaches as well. So they’re developing in the sport and that’s really important that they develop skills outside of the game itself. “

“The important thing about the team is the international solidarity. We’re partners with Islamic relief, we have a long-term programme with the young girls of Gaza.

“We’re building a football pitch called Peace Park for the girls in Gaza, and Fadhila has been the lynchpin in all of this. She’s a champion.”

Speaking about her team ahead of the People of the Year awards, Fadhila said: “The atmosphere is amazing – with my team it’s a family, it’s my second family. Usually with certain people I only talk about certain things, but with my team I talk about everything. No matter how bad it is, I’m able to open up to them.

We’re all equal. It doesn’t matter if you’re male, female, tall, short. Everyone should get the same chance and equal opportunity as well.”

Fadhila was presented her award by Republic of Ireland international footballer Stephanie Roche, who praised her for her work in promoting diversity in sport.

Speaking after receiving her award, Fadhila said: “At the moment I’m celebrating Fare Week which is Football Against Racism Europe and we’re going around the whole of Ireland doing workshops on anti-discrimination around schools and community centres as well.