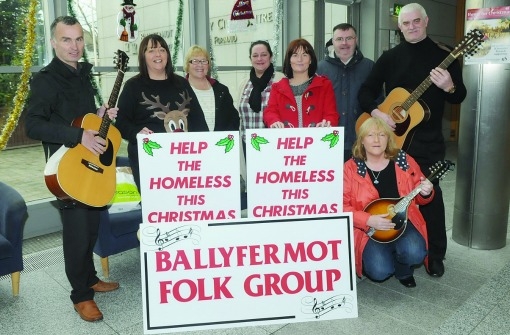 GOOD musical folk have put together a CD to raise funds for charity this Christmas.

In response to the homelessness crisis, the Ballyfermot Folk Group have released an original Christmas song Home for Christmas to raise funds for three charities – Ballyfermot Help 4 the Homeless, Clondalkin Helping Homeless and Guild of the Little Flower (Penny Dinners).

Ballyfermot Folk Group member Gerry Simpson said the group have always raised funds for charities in years past, including Pieta House, but this year decided to support local groups for the campaign.

Susan Birkett, another folk group member said: “There are 30 members in the group. They all come from Ballyfermot originally. They work in many different industries across many different sectors and enjoy renewed friendships having reformed after 30 years.

“The group remains proud and loyal to their childhood home of Ballyfermot. We mainly sing at the Assumption Church in Ballyfermot at Saturday evening Mass. We also sing at other events upon request, and have raised funds over the past few years for Simon and other local charities.”

In Clondalkin, Mannion’s on Monastery Road, Kavanagh’s in the Mill Centre and Jardine’s Beauticians on Orchard Road have already signed up to stock the CD, with the folk group awaiting confirmation from a wide variety of other businesses and retail outlets. The CD was launched this week and is on sale at local businesses in Ballyfermot, Clondalkin, Palmerstown, Lucan, Chapelizod and wider communities.

The CD costs €5 and all proceeds go towards the three nominated charities.

For further information on stockists in Clondalkin, Palmerstown and Lucan email ballyfermotfolkgroup@gmail.com