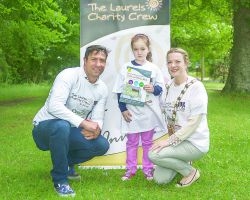 THE Laurels Charity Crew is at it again – this time raising funds to help in the fight against suicide.
It was announced on Friday that the annual Laurels Charity Crew 10k Fun Run/Walk will take place on September 19 this year with all proceeds going to Console.
The run, which is in its third year, is organised by the charity group which has already raised more than €500,000 for Our Lady’s Hospital for Sick Children.
Olympic silver medallist councillor Kenneth Egan and Mayor of South Dublin Sarah Holland were on hand to launch the event which will take place in Corkagh Park.

Race Organiser Derek Cummins is excited about the third annual run and hopes this year will be equally as successful as 2013 and 2014.
He said: “Our first two run/walks allowed us to buy and install defibrillators for 29 schools and 10 shops in the area, along with purchasing sports equipment for schools.
“September is World Suicide Prevention Month and we would love this year’s Fun Run/Walk to highlight the work done by Console, and raise awareness of their free 1800 247 247 helpline.”
Paul Kelly, CEO of national suicide prevention and bereavement charity Console, urged people to use the opportunity to run, walk and talk about suicide at the event.
He said: “Two of Console’s central themes are community and communication, and the 10k Fun Run/Walk is the perfect example of this. We’d like to ask people to get in touch with family members or friends that they may only see once in a while, and come together for a chat and either a run or a stroll at Corkagh Park.
“Console would like to thank the Laurels Charity Crew, South Dublin County Council and Aryzta Food Solutions for highlighting suicide prevention through this event.”
Mayor Holland confirmed that the council will be providing the race infrastructure, live music and a DJ, as well as entertainment on the day.
The entry fee to take part in the 10k fun run/walk is €25, which includes chip timing, a race jersey and a donation to Console.
For more details visit the Laurels Charity Crew Facebook Page or via precisiontiming.net