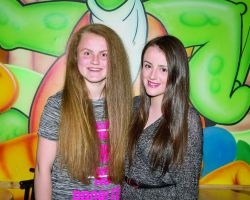 Father begins his 683km trek in memory of his daughter Leah

A DETERMINED Tallaght father set out on a 683km trek from Malin to Mizen head this weekend in memory of his daughter and to raise much needed funds for Aoibheann’s Pink Tie and Barretstown.

Last year, Tom set out from Tallaght to Killarney, Co Kerry on a 313km journey as part of a fundraising initiative he called Footprints for Leah, after his daughter Leah, who lost her battle with cancer in August 2013.
This year he has doubled his efforts and has created a new challenge for himself by walking the famous Donegal to Cork route over two weeks.

Speaking to The Echo while making his way through Donegal, Tom said: “I’m not too bad. My feet are quite sore, but not near bad enough to stop. There are kids out there that are going through things that are a lot worse than what I am going through.
“At the moment I’m walking from Donegal Town to Bundoran. I had a bit of a scare the other day and got quite dehydrated because of the weather, and ended up getting quite sick, but I was okay the next day so I pushed on.”
The Footprints for Leah campaign kicked off earlier this year as Tom began training for the journey, and Tom’s journey was launched with an event in Tallaght Adventure World last week with haircuts by Chloe Flanagan and Katelyn O’Neill in aid of Footprints for Leah taking place.
Speaking about his training this year, Tom said: “The training this year went well – I didn’t do as much as last year, but I feel like I’ve done enough to get me there.
“We’ve got a new baby in the family, so he’s been keeping me busy, along with our other kids. Finding time to work, spend time with family and train has been tough.
“There’s been a lot of support. There’s a lot of pressure on me, but it’s pressure that I’ve put on myself. I’m not going to give up.
“Over the next few days I’ll be meeting up with people on the journey and then I’ll have a rest day next Tuesday before finishing up on August 2, if all goes well.”