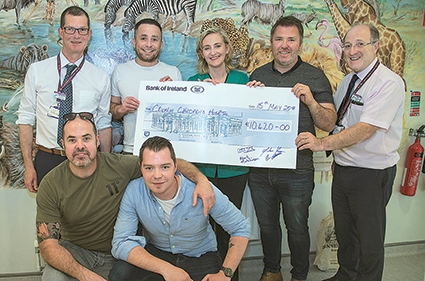 OVER €10,000 was raised for a cancer ward in Our Lady’s Children’s Hospital, Crumlin, after a charity match day and raffle was held in Saggart on Thursday, April 10, reports Aideen O’Flaherty.

The event, which was organised by Mark Hutchinson, Robert McCarthy, Lee Carroll, Paul Fitzpatrick and Graham Keane, attracted a crowd of nearly 100 people who bought tickets to the charity match, and a draw and live music which was held in Jacob’s Bar in Saggart afterwards.

Graham Keane, who is the brother of former Republic of Ireland captain Robbie Keane, told The Echo: “About six weeks ago we just thougth we’d do something really small, like have a game of football and raise some money, maybe about €1,000.

“Then we decided we would hold a draw and do spot prizes, and it just grew legs from there.

“We couldn’t believe it when we saw how much had been raised.”

The money will be going to St John’s Ward, which is the main cancer ward for children in Ireland, in Our Lady’s Children’s Hospital, Crumlin.

Explaining why the organisers chose to fundraise for St John’s Ward, Graham said: “We wanted to do anything we could to help make life easier for the children in that ward, in any capacity.

“The generosity of people who bought tickets and donated spot prizes was unbelievable, we can’t thank them enough – without their help we wouldn’t have been able to raise so much.”

The event ultimately raised €10,420 for the cancer ward, and popular prizes on the night included a 42” HD Smart TV, an Xbox One S, a signed Shamrock Rovers jersey, a Paddy Power voucher, a stay at the Clayton Hotel and a stay at the Citywest Hotel.