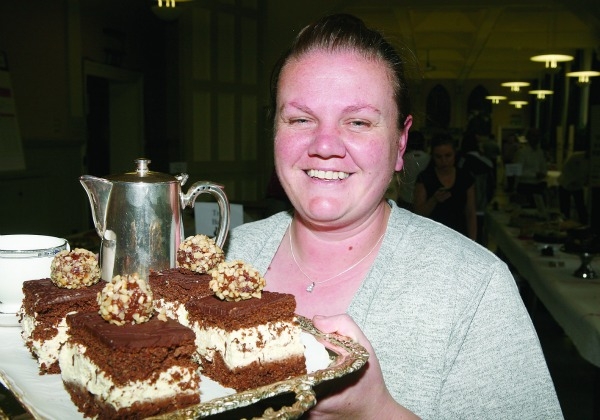 Chefs cooking up a storm at Sodexo Ireland awards

Living in Belgard, Amy Begley is one of four chefs based in the staff canteen in Central Bank, where she has been working for the past eight years.

While Amy and her co-chefs are employed directly by the bank, they work alongside Sodexo staff every day, as the services company has the catering contract.

Amy told The Echo: “We all work together with Sodexo staff and feed more than 400 people every day in the bank, so we like to support the awards and it’s great experience for us and recognition if you do well.”

This year, Amy won a silver medal for her Polish-inspired tray bake, which saw her make her own version of Ferrero Roche.

“I had to eat a lot of Ferrero Roche to get the taste right”, Amy said.

“However, it paid off in the end when my cake, which was recommended to me by a Polish colleague, won second place in the Innovative Tray Bake class.

“I love baking and pastry but I don’t get to do much of it during my daily job, so entering the Sodexo awards really helps to build my CV and experience for any future jobs I may go for.

“It’s great to get the recognition, especially when someone like Derry Clarke is on the judging panel.”

A second Tallaght resident, Stephen Tope from Fortunestown also won a silver medal on the day in the Novice Barista challenge.

TV chef Derry Clarke said: “The standard is always high and I found the culinary skill shown in the baking and deli classes to be particularly excellent this year.

“I was also very impressed with the pride and sense of achievement shown by the staff and their families.
“There was a great team spirit on the day.”

Sodexo Ireland is part of the global Sodexo Group, the world’s largest services company that delivers services to clients in business, industry, education, financial and healthcare.

It employs approximately 2,000 staff in 200 locations across Ireland which serves 90,000 people daily, and has a reported €21 million annual spend on local Irish food.