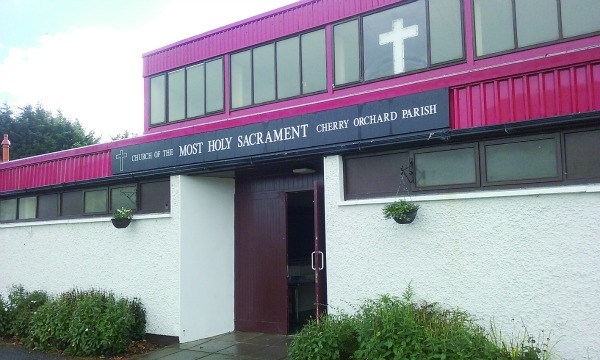 FRONT doors of a church were kicked in by a thief who proceeded to smash internal doors and steal parish property during a sickening robbery which has shocked a community.

The brazen theft occurred on the night of Wednesday, November 11, at the Church of the Most Holy Sacrament in Cherry Orchard.

Once inside, the thief kicked in six doors, including sacristy doors, stealing a television, microphones and portable speakers.

It is the latest burglary incident to occur at the church grounds, after the parish priest’s house was broken into on August 2013.

On that occasion, Fr Sean Duggan arrived home to find a burglar coming down the stairs wearing his baseball hat and wielding the priest’s hurley.

Fr Adrian Egan said: “The main concern was getting the front doors fixed. That’s the annoying part. All the doors were kicked in inside. We had only just done up the office space.”

Fr Gerry O’Connor feels the robberies can be cyclical in areas, but noted a rise of recent activity in the community.

Unfortunately, this wasn’t the only recent attack on a community building in recent weeks – the Orchard Community Centre suffering a similar robbery over the Bank Holiday.

A thief broke into the building twice on October 24-25, kicking in doors and damaging property.

Marion Doyle, Manager of the Orchard CC, said: “They didn’t get any money – there is no money in the building – but there was a lot of damage. Three external doors were kicked in, which will cost €4,000 to fix, and two internal doors were wrecked.

“It’s very disheartening. We had just put on a €5,000 firework display for Halloween, and had 800 people through the centre for a disco. Even though we upgrade the doors, they still find a way through.

It’s money that could be going back to the community. All the community groups work together but a little few cause so much damage. I feel like screaming.”

Community centres in Cherry Orchard have been forced to spend tens of thousands of euro upgrading their security in recent years due to a spate of attacks and break-ins.

Locals believe the two recent thefts are linked, but this was not confirmed by gardai.

The Church of Most Holy Sacrament are hosting a Mass on Saturday, November 21, for beloved ones in the area who passed away in the last year.

NEWER POSTCemetery car-park to get CCTV at a cost of €30,000
OLDER POSTThe Echo Clondalkin edition November 19 2015