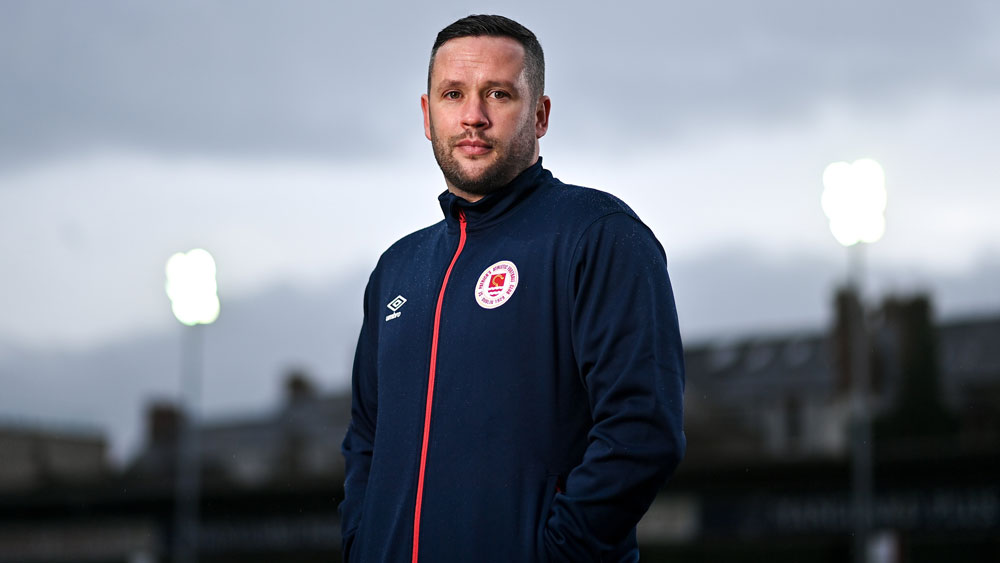 Clancy glad to be back in full-time football with Saints

As he continues to prepare his side for the beginning of the new SSE Airtricity League Premier Division season, St Patrick’s Athletic manager Tim Clancy has expressed his delight at being back in full-time football.

A former professional player who represented a host of clubs across the UK – most notably Scottish Premier League outfits Kilmarnock, Motherwell and Hibernian – the Meath native operated on a part-time basis during his four-year stint in charge of Drogheda United.

His recent switch to Inchicore has afforded him an opportunity to focus solely on soccer once again, however, and he is relishing the challenge that lies in store.

“All I’ve ever been involved in is football since I was 18. It has been my profession for nearly 20 years now. Obviously when I was at Drogheda it was part-time and it was in the evenings, so I went and I worked.

I suppose people will say it was a normal job as well, but that was only a two year period,” Clancy explained in a media call on Wednesday.

“All my adult life, since I left school, has been professional football and getting back into full-time football in the mornings again, I haven’t had it since I was at Sligo. Maybe six years ago or so.

“It’s what I focused on and that’s sort of where I wanted to be. Now I’ve got that opportunity and I’m certainly going to make the most of it.”

Even before taking over Drogheda in the winter of 2017, Clancy had a vast knowledge of the League of Ireland.

After being released by St Johnstone at the end of the 2013/14 Scottish league campaign, he was brought to Shamrock Rovers by his former Hibs boss Pat Fenlon.

His time in Tallaght was relatively short, but he also enjoyed stints at Sligo Rovers and Bray Wanderers before eventually hanging up his boots and almost immediately assuming the reins at Drogheda as a 33-year-old.

By agreeing terms with Pat’s, Clancy was assuming a mantle that was vacated by another of the league’s most promising young managers.

Before returning to Dundalk – the club he had served so well as a player – Stephen O’Donnell guided The Saints to an FAI Cup title at the expense of Dublin rivals Bohemians in the Aviva Stadium last November.

Trying to match this success and improving on the club’s second place finish in the 2021 top-flight will be obvious targets for Clancy – albeit they aren’t ones that have been laid out by the Pat’s board.

“I’ve been looking for this opportunity since I got a managerial position. Full-time is where I wanted to be and I’m coming into a job when the team are on an upward curve. A really good season last year and I’m just looking to add to that, try and bring it on more.

“The chairman has been very supportive. Obviously we want to close the gap to what was last season. We finished second and we’ll try and get as close to the top of the league as possible, but there has been no targets or pressure put on.”

While Clancy has been working behind the scenes to assemble a formidable squad, they are still on the lookout for a new shotstopper in advance of the upcoming campaign.

Vítězslav Jaroš did a superb job between the sticks for the Saints last year but has now returned to parent club Liverpool with a view to progressing further in his own career.

It remains to be seen who the Pat’s goalkeeper will be come the start of the term, but with several weeks to go until they are back in competitive action, Clancy is confident of adding to his current options.

“I know PJ [Patrick Jennings, St Pat’s goalkeeping coach] has done great work in the background for the last year, the relationship he has struck up over in the UK. There’s options there. The season doesn’t kick off for another four weeks or so.

“We’re conscious now going into the pre-season games that we’re going to get that position sorted and we’re hoping to have a few more added to the squad in the next week or so,” Clancy added.