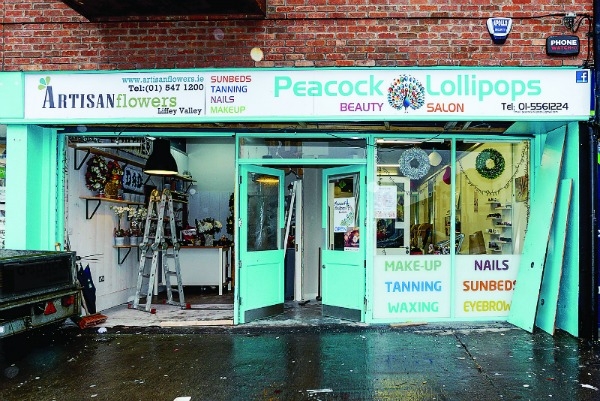 TWO new businesses in Clondalkin are temporarily closed this week after thugs rammed a stolen car repeatedly through the front of the units.

It is major blow for the community and the shop owners, who invested close to €50k to open the premises two months ago in Neilstown.

The incident, which occurred in the early hours of Tuesday morning at Chaplain Place, saw a stolen car obliterate the front of Artisan Flowers and Peacock Lollipops beauty salon.

No items were stolen from the premises, but significant damage was inflicted on the shops during the mindless attack.

Gardaí in Ronanstown are investigating CCTV images, which identify a car ramming the shopfronts “up to ten times.”

A local source said they had “never seen anything like it”, and the incident seemed “intimidatory” in nature.

Up to four staff members are affected by the temporary closure of the shops, along with customers who had booked appointments at the salon in the lead-up to Christmas.

“Things were going so well – we were trying to bring a quality service to the community and everybody had been really lovely to us,” said Aoife Nídhuinn, Manager of Artisan Flower.

“We have no shopfront at the moment, the flooring will have to be replaced, and we are out of action until it can be fixed. It is not ideal at this time of the year but we have to move forward.”

The Echo understands the owners of the two shops are devastated, having worked extremely hard to get the premises up and running.

“It’s a shame, the shops were going really well and added real quality to the area,” said a local resident.

A garda source said they were investigating an incident of criminal damage, after receiving a call at 5.15am on Tuesday morning.

Gardaí are also investigating the possibility that a burnt-out car, found nearby in Harelawn shortly after the attack, is connected to the incident.