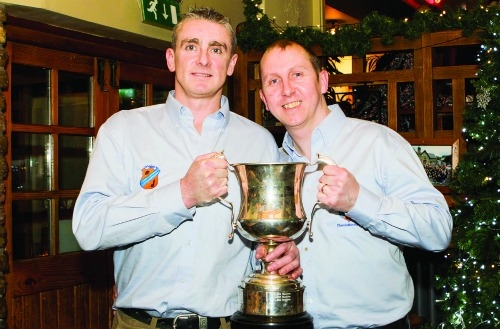 CLONDALKIN RFC successfully defended their Lalor Cup title after beating Portlaoise 21-12 in Athy on Sunday. In what was their first game of the new year, the holders were without the likes of Tom Mc Grath, Thomas Ankers and Luke Sweetman, yet coaches Alan Hickey and Kevin Cullen were still able to field a very strong squad.

They enjoyed a better start with good carries from Sean Brennan and PJ McAuley, clever angled kicking from John Murphy and powerful defence from Darren Madden, Leigh Berisford and Brennan.

It told on the scoreboard as they raced 9-0 in front by the halftime break, captain Stephen Cunning-ham firing over three well-struck penalties.

Coach Hickey opted for cup final experience in the second half, as he intro-duced returning former first team captains Ciaran and Kevin Cullen while also switching Cunning-ham to outhalf and Murphy to full back.

These changes along with fresh power in the front row, in the shape of Bobby Smith, allowed Clondalkin take full control of the contest.

A snipe by scrumhalf Josh Dunne, was followed by a great ball carry from French flanker Thibaut Remark and Smith was on hand for the offload before powering over from 15 meters with three defend-ers left in his trail.

Their second try was again finished by Smith in a similar manner, when replacement scrumhalf Dara Ward found Kevin Cullen in midfield.

His delayed pass sent Smith through a gaping hole and with one full back to beat, he impressively crashed over beside the posts, Cunningham adding the extras for a 21-0 lead.

Portlaoise, to their credit, kept sending their strong baller carriers at Clon’ and eventually got their reward with two late scores.

Delighted with the win Coach Hickey said “our work rate was non-stop, and our defense as good as it has been all season.

“We expect to bring that into our remaining league fixtures and then into our Towns Cup campaign”.

In the past two seasons Clondalkin have lost both a final and semi final in the Towns Cup, and will be certainly determined to add more silverware to the club cabinet.

Clondalkin firsts and seconds are at home to Suttonians in crucial 1A Leinster League action in Gordon Park this Saturday.

What’s more the club are always looking for new players of all experience, for their senior mens and ladies and underage sides.