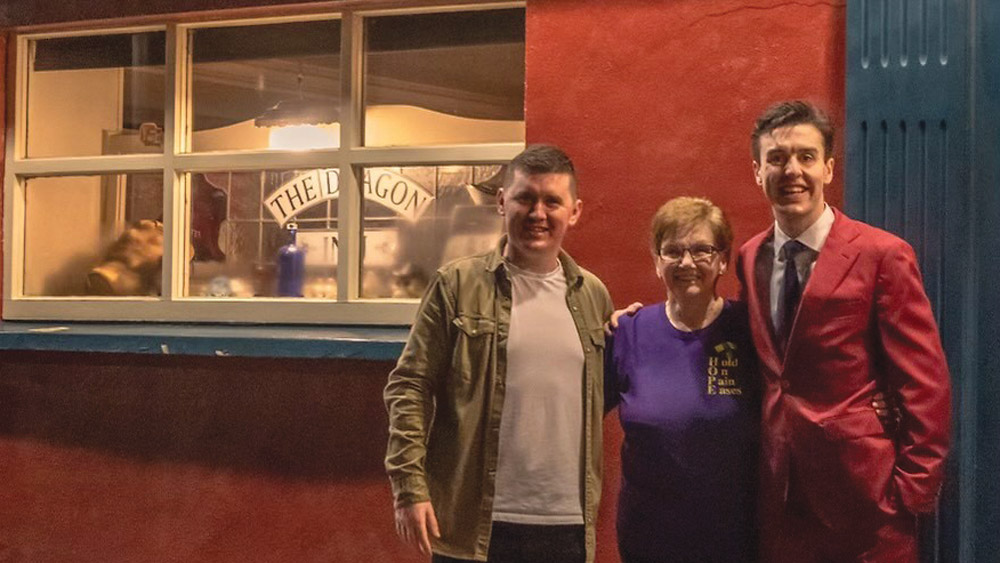 COMEDIAN Al Porter has made a return to the comedy scene with a set at The Big Charity Cabaret which helped raise some €2,000 in aid of HOPE – Suicide Prevention Drop-In Centre.

Last Saturday, The Big Charity Cabaret took place in The Dragon Inn in Tallaght Village with a strong line-up which boasted the likes of singer Mary Byrne and musician Gavin Doyle.

Mick Healy, Ray Conlon, Chris Keeley and the crew at The Dragon Inn managed to sell over 400 tickets to raise €2k for HOPE, which was founded by Tallaght woman Mary McLoughlin.

One of the highlights was when, much to the surprise of those in attendance, Al Porter took to the stage to perform his first stand-up routine in over five-years.

“Following Al Porter’s recent return to stage, we were delighted to get him on the line-up, but I had no doubt he would receive the reception he did,” Chris Keeley told The Echo.

“On and off the stage he was well received, a true gent and very professional.

“The place was lit up and delighted to see him back doing what he does best. It was like he never left.”

A former student of St Mark’s Community School, Al rose to fame with his stand-up routines when he was only 19 and picked up gigs broadcasting on Today FM and hosting Blind Date on TV3.

In a statement, released in July, Al, whose real name is Alan Kavanagh, explained that allegations brought his career to a halt five-years-ago.

“In November 2017, a series of tweets making allegations against me snowballed into newspaper articles, and eventually more,” Al said in a statement.

“I took these issues in my personal life very seriously and I decided to walk away from all my work commitments as I couldn’t possibly keep working and deal with everything else too.”

An allegation of sexual assault was made against him to gardai, and was later withdrawn with all charges dropped in November 2019.

After these allegations brought a halt to the Tallaght comedian’s career, Porter vowed to “make people laugh again” in a statement last July.

“Over the years there’ve been offers to go back on stage, but I just wasn’t ready,” Al’s statement read.

“I expected the time away to be shorter, and the lockdown years played their part too.

And Al has stayed true to his word.

NEWER POSTElderly man may have been lying in hallway for three days
OLDER POSTCheck out this week’s Echo jobs – November 10th, 2022