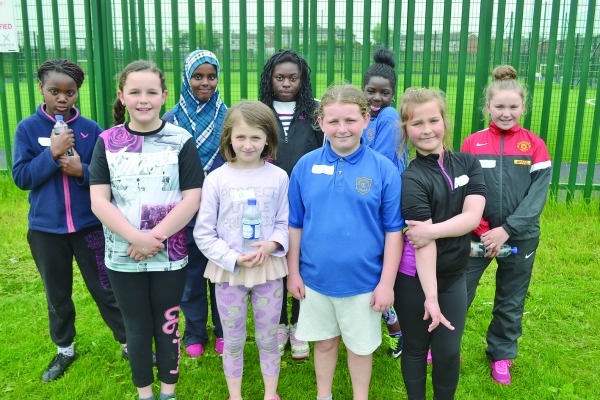 Organised as part of a Foroige Leadership for Life programme in association with NUI Galway, the event saw Tallaght teenagers Jack Woolley and Aoibhe Thornton of the M.C Teens Foroige Club take up the challenge of reviving the activity after volunteering with the Community Games last summer.

When they enquired as to why their area was not represented at the Dublin Finals in Morton Stadium they discovered that Woolley’s grandparents had been the last volunteers to bring a Jobstown team to Santry back in the mid eighties.

Although the area has been back in action running community games events for the past 10 years, the shortage of volunteers and funding has restricted its engagement to activities in the likes of art or chess.

Under the auspices of an elite athlete, a health and well being ambassador for SDCC and in the spirit of volunteerism, Woolley and Thornton, both members of South Dublin Taekwondo, took the chance to promote athletics in the area.

Participants battled it out for medals and a place at the county finals in track and field events from hurdles to the puc fada (long puck).

Those who made the podium were presented with their awards by Stephen Leonard, Sports Editor, The Echo, and Philip Preston, Tallaght Person of the Year, who also happens to originally hail from Jobstown.

The Community Games, originally called the mini Olympics was set up in Walkinstown by Joe Connolly in 1967 and is now a voluntary nationwide organisation that aims to provide children with an introduction to sport and culture and encourage healthy active lifestyles.

It aims to foster community spirit, participation and co-operation in a safe friendly environment.

And these goals were evident in Jobstown last Wednesday from the willingness of local parents, residents, school teachers, youth clubs, community organisations and bodies such as Tallaght Youth Service, The ETB, Tallaght Leisure Centre, SDCC and other volunteers who gave their time, resources or expertise to help run the event.

Training for the lucky winners will take place every Wednesday afternoon until the County finals on June 18/19.

With only four weeks to go, Woolley and Thornton are appealing for contributions from local businesses to help support their initiative.

Next year will mark the 50th anniversary of the Community Games and the door is always open to other areas to register with Dublin Games.

Participation can range from 1 to 40 events and the first year is free. Contact Annette on 087 9717378 or dublin@communitygames.ie for more info.