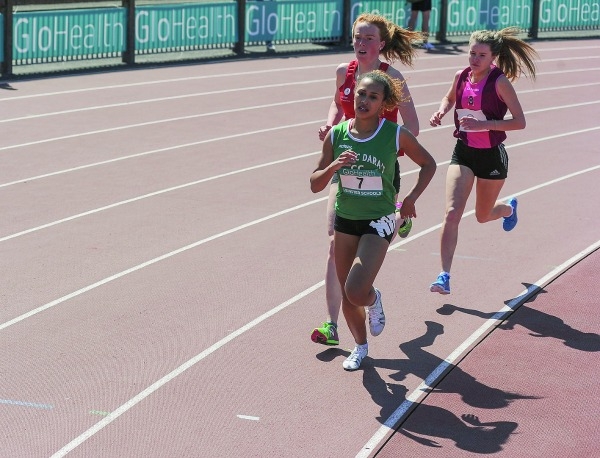 THERE were some very impressive performances by local athletes at the GloHealth Leinster Schools Track and Field Championships in Morton Stadium last week.

Moyle Park College’s Louis O'Loughlin, who won the All-Ireland junior boys' cross country title in March, produced another great run to capture the 800m with ease in a time of 2:05.24.

Eimear Fitzpatrick of Our Lady’s Terenure continued to impress over the barriers in the 1500m Steeplechase with a winning time of 5:05.84.

In the Senior Girls 1500m contest Nadia Power of St MacDara’s crossed the line first in a time of 4:36.50 to stave off the challenge of runner –up Emma O’Brien and third place Fitzpatrick.

Lara O’Byrne did St Joseph’s Lucan proud by registering a new record in the Intermediate Girls Pole Vault after she cleared 2.80m while Kylemore College star Sean Lawlor completed a Senior Boys Sprint double winning the 100m in 10.83 and the 200m in 21.86.

He beat off the strong challenge of closest rival Eoin Doherty of Drimnagh in the former while in the 200m another Drimnagh athlete Paul McDermott took third.

Joseph Lyons, representing HFSC Rathcoole, emerged runner-up from the Senior Boys 400m race with Richard Keogh of Templeogue in fourth after which Lyons took third in the 800m and Keogh again fourth.

Tallaght Athletics Club’s Rhasidat Adeleke won the Minor 80m sprint title in 10.32 and added silver in the Long Jump with a leap of 4.70m while Lauryn Mc Dermott took bronze in both the 200m (26.03) and High Jump (1.48m) at junior level.

Aidan Darcy set a new championship record for the Under 16 200m while Jennifer McAdams finished fourth in the Junior 1500m.

Joseph Lyons won bronze in the Senior 800m and then silver in the 400m while Eoin Doherty also earned silver in his 100m final at Senior level.

There was a third place finish for Kolcide Abioudum of St John’s Ballyfermot in the Long Jum Intermediate Long Jump after he cleared 6.15m

Cara Brennan of St Joseph’s in Lucan clocked 13.26 seconds on her way to fourth place in the Intermediate Girls 100m before school mate Saoirse Tobin finished fifth in the Javelin.