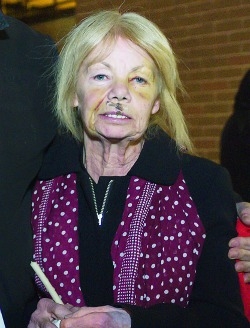 A GRANDMOTHER viciously assaulted during a brutal attack just yards from her home, was overcome with emotion as the Ballyfermot community rallied to support her during a vigil on Saturday (March 14).

Jenny Lynch (72) was savagely attacked by three men as she walked home from mass at St Matthews Church with friends on Saturday (March 7).
The brutal assault on Oranmore Road left her with a black eye, a split lip, a busted nose and bruises to her head – forcing the traumatised great-grandmother to cancel a planned Mothers Day holiday to Spain.
Three brothers Andrew (30), Paul (47) and Stephen Smith (39) from Ballyfermot, were charged last week with assault causing harm to Jenny Lynch.
Defence lawyers were given instructions to consent to a remand custody when the three men made an bail application in Dublin District Court.
Ballyfermot was stunned in the wake of the cowardly attack – residents posting heartfelt messages of support for Jenny and condemnation of the attack.

For the full story see page 16 of The Echo