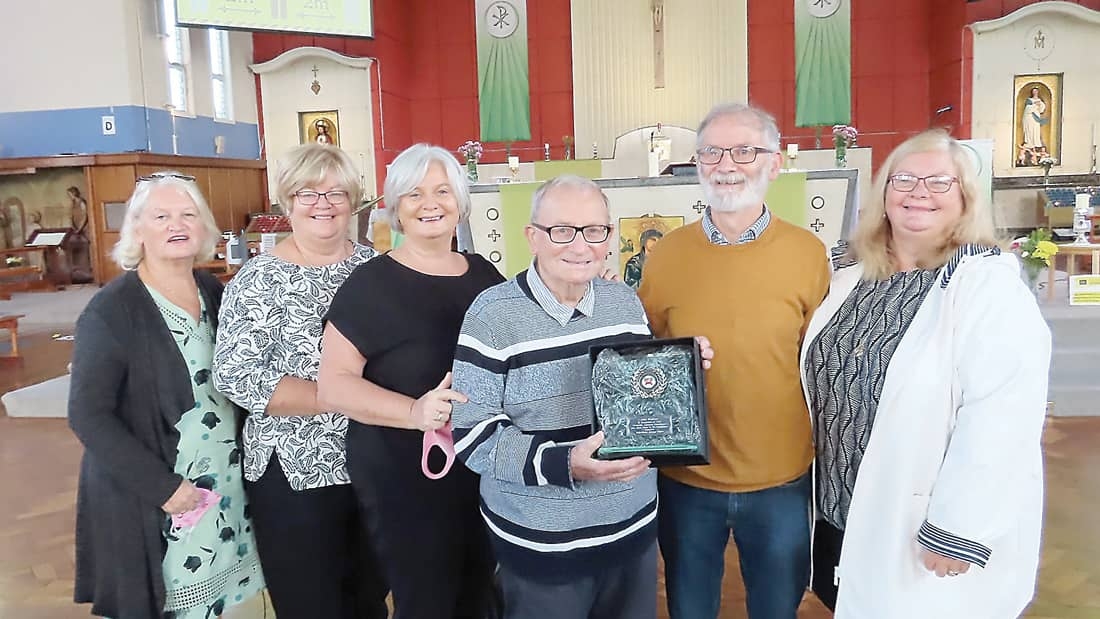 THE latest restrictions on people meeting up in public, scuppered a proposed presentation ceremony to a pair of community stalwarts last month.

However, Ballyfermot Heritage Group found a way to make presentations to the two local heroes – one at Mass and to the other person at her home.

The group made the presentations to Pam O’Reilly and John Sweeney for all their voluntary work in Ballyfermot over the years.

A statement by the heritage group said Pam was a very active member of the Ballyfermot Community Association.

“She also was involved in the education, transport, the sports complex, childcare and women’s health. Only last September 2019 we saw the opening of the Tribute Garden which Pam was involved in.

Down the years she had meetings with politicians, Dublin City Council officials, HSE officials, and educational officials and on most occasions left the meetings on win win terms.

Pam sat on the Education Subcommittee that successfully ensured the building of the senior college. She was secretary of the Sports Federation all this and rearing her family along with her late husband Peter.”

The group thanked Fr Adrien for giving them the opportunity to make the presentation in Assumption Church to John Sweeney, who has “served Ballyfermot on a voluntary basis for the last 60 years.”

“John has been involved in the Newly Weds Group, first chairman of the Ballyfermot Tenants Association, the Residence Association, the Community Association, The National Rents Strike,  Ballyfermot TV, volunteer in St Matthews Church, and now back to where it all started Our Lady of the Assumption Church. All this and rearing a great family along with his late wife Lily.”

The heritage group acknowledged that both Pam or John would be the first to say that they “did not do all this on their own.”

“They were surrounded by great voluntary workers, and in a way this presentation recognises these people also.”

NEWER POST‘The time is to act now, not to wait until someone is hurt’
OLDER POSTGallagher’s Boxty use lockdown period to reset business model