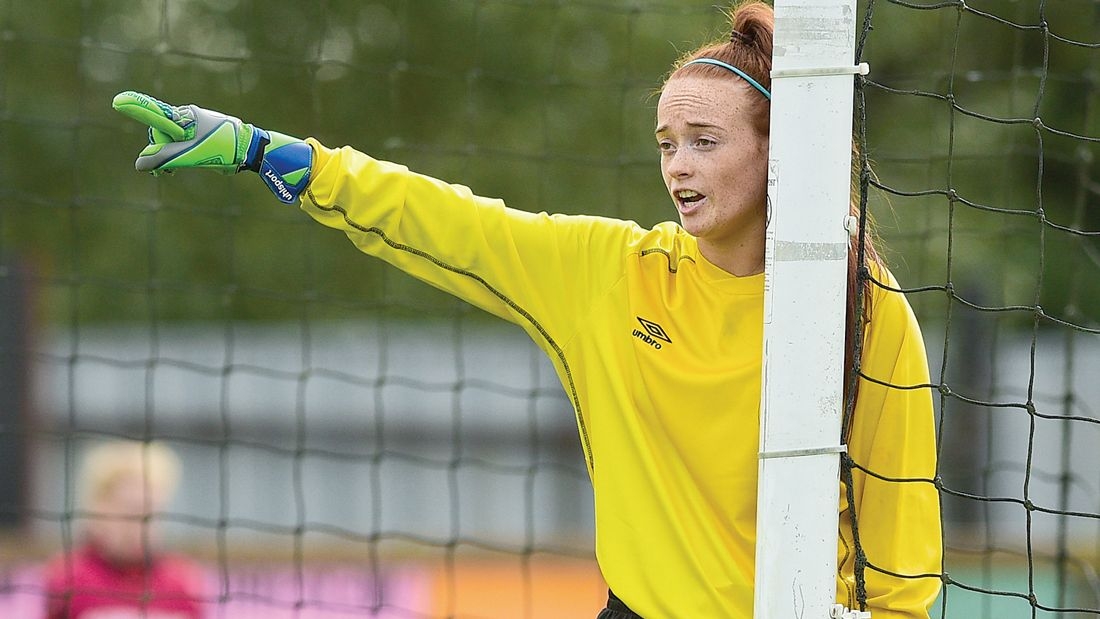 Peamount United women’s goalkeeper Naoisha McAloon feels the ferocious competition for places at the Newcastle club is helping to raise the standard of her game.

Following a string of impressive performances in Peamount’s march to the Women’s National League, McAloon was a popular choice on the So Hotels Team of the Season in 2019.

Her main rival for a spot between the sticks is the formidable Niamh Reid-Burke, who has been capped four times by the Republic of Ireland at senior level.

Yet rather than viewing each other as direct threats to their respective positions within the team, McAloon and the former Shelbourne netminder are working towards a common goal.

“Last season we had the best defensive record. That just shows how good of a defensive team we have. It’s great working alongside Niamh. The competition raises the standards, raises the hunger for trying to get into the starting eleven. It’s really good and we learn off each other.”

If Burke has played an important role in the development of McAloon in the past few seasons, the same could be said about Peamount manager James O’Callaghan. Unsurprisingly, the Meath native is effusive in her praise of the Greenogue supremo.

“He’s a great manager. Has loads of experience behind him. He’s good at giving advice, he lets us express ourselves on the pitch. A great coach. The training session he puts on is great and how he wants us to play. We play a nice style of football, which is always good,” McAloon explains.

“He’s been brilliant. He has brought me up in the women’s senior team the last three or four years now. I’m very thankful for the opportunities he has given me.”

In preparation for an eventual resumption of competitive action, Peamount returned to training on June 15 on a non-contact basis. They subsequently moved onto full contact sessions in advance of the belated opening to the Women’s National League on August 8.

For McAloon and the remainder of the squad, it was a surreal experience getting back into a weekly routine after such a prolonged absence due to the outbreak of Covid-19 across the nation.

“It was definitely different. No high fives or anything like that. You’re in and you get your temperature checked. Sanitisers, training in small groups. Personally it was just me, the other goalkeeper and our goalkeeper coach. But I think anything is better than nothing. It was good to be back in a team environment.”

Though Kilkenny United have withdrawn from the WNL, there will be three new teams in this year’s competition – namely Bohemians, Athlone Town and Treaty United (re-branded from Limerick FC). McAloon is delighted to see the number of league clubs increasing and is looking forward to the challenge they will pose.

“It’s great to see the league growing and more teams coming in. It just builds the competition more. The standard every year is getting better and better. It’s great to see new clubs come in and obviously we’ve never played against the likes of Bohs and Athlone Town.

“It will be good to see what they’re like. More competition for the league and it’s going to be exciting to play against these new teams,” McAloon added.

NEWER POSTReturn of the flying ants!
OLDER POSTPat’s and Rovers are aiming for a winning return to their season