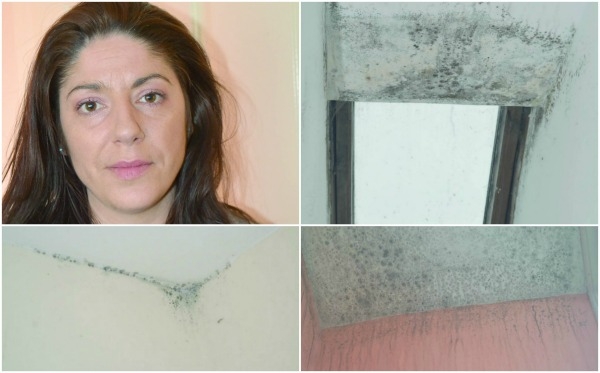 Concern about children in ‘mould-ridden’ house

THE issue of damp in council homes is back on the agenda this week, after a Tallaght mother raised concerns for her children’s health whom she claims are living in a “mould-ridden” council house.

Kerry Killeen has been living in a bungalow in Glenshane for the past ten years with her three children aged 13, six and five.

She told The Echo: “The house is so damp and mould-ridden, the smell of damp is potent and it sticks to everything, even our clothes.

“We can’t use one of the bedrooms because the mould has gotten so bad and I had to stop using the wardrobes because everything I put in there would come out damp and with mould.

“I have to store everything in plastic, sealed containers.”

She added: “I’m very concerned for my children’s health, they’re all on double inhalers and while my doctor can’t confirm that their breathing problems are down to the damp, I know that the situation can’t be helping.

“I have contacted the council a number of times and they have visited my home, but just told me to paint over it.

“This is not good living conditions and I’m really concerned over the damage being done to my children who are breathing in this dampness and mould every day.”

In past years, The Echo has covered a number of articles concerning excess condensation in council homes, with the issue going back as far as 2010 when South Dublin County Council surveyed 50 homes affected by mould growth.

When contacted by The Echo, a spokesman for South Dublin County Council said that they did provide advice to the tenant on how to deal with damp in November 2014.

The spokesman confirmed that a number of subsequent calls have been made by the tenant to the council to report damp and mould on the walls and around windows.

According to the council, they did visit the house on a number of occasions, including mid-March, but the tenant was not home.

However, the council said it would send a foreman up to the home again this week.