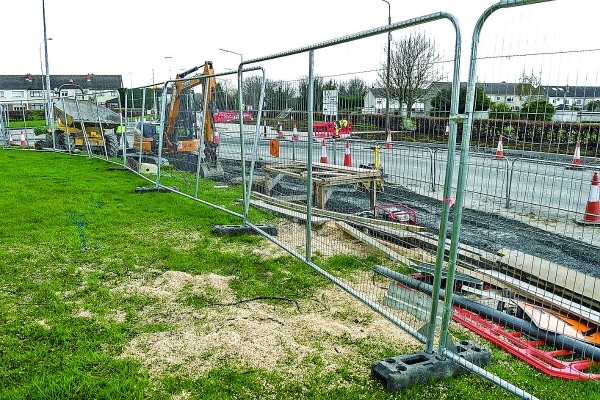 Forty years a-growing, yet council cuts the tree down

GLENVIEW residents this week woke up to council contractors cutting down a 40-year-old mature tree in their estate, The Echo has learned.

The tree, which was more than 30 feet high, was, according to residents, planted more than four decades ago – and has been cared for and protected by the residents living in Glenview Lawns over that time.

One resident told The Echo: “I couldn’t believe it when I looked out my window and saw lads cutting the tree down, I was shocked and pretty upset.

“I went to talk to the crew but they didn’t give me any information and since the council didn’t notify or consult with residents, nobody knew that anything was due to be disturbed – or if more trees were coming down.”

He added: “Residents have been looking after these trees for the past 40 years and the council has now taken a piece out of our special green to facilitate the new bike lane through the village.

“I know things have to change but this to me is very drastic and I feel we need to speak out now so that one tree doesn’t lead to more, we need to protect what we have.”

When contacted by The Echo, a spokesman for South Dublin County Council’s roads department confirmed that the tree was removed to facilitate the introduction of a new pedestrian path – which is part of the Tallaght to Templeogue cycle scheme works.

The spokesman said: “One tree was taken down to facilitate the building of a new pedestrian footpath which will run up to the existing roundabout at Glenview.

“This is part of the overall Tallaght to Templeogue cycle track scheme and the new upgraded roundabout at Glenview will have new pedestrian crossings, better access to footpaths, reduced traffic speeds and a new footpath leading up to it from Glenview Lawns.

“It will be improved for pedestrians and also for those getting on and off at the nearby bus stop.”

When asked about the reasons for taking down the tree in Glenview Lawns on Monday, he said: “The tree had to come down on safety grounds.

“Two other semi-mature trees, in consultation with residents, were taking down in Brookmount to facilitate new public lighting.”

He added: “There is a landscaping plan and any trees, shrubs or hedges removed will be replanted.”
The council confirmed that work on the roundabout at Glenview should be completed within the next three weeks.