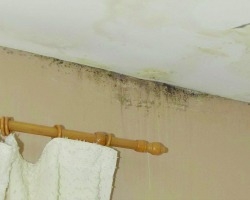 FURTHER concerns have been raised about the condition of homes in Balgaddy after European Committee of Social Rights in Strasbourg ruled in the residents favour.
The committee declared that the concerns of residents are admissible and are awaiting a response from the local authority regarding the issue.
Residents have been complaining about damp, mould, serious fire concerns and structural issues in homes across Balgaddy for a number of years.
Lorraine Hennessy, spokesperson for Balgaddy Working Together Group, told The Echo that residents have been pushing for these issues to be looked at since 2008.

She said: “The result in Strasbourg is positive for residents but it is because of the failure of the council to address the issues that people are living with this bad development.
“Condensation and damp have an impact on people’s health and these homes need to be assessed. Remedial works did do some things but other things – the structure of dwellings – needs to be looked at.”
There are 465 homes in Balgaddy of varying types and sizes, some with “priority” issues and other with smaller repair needs but residents believe that the development as a whole must be looked at.
Lorraine said: “There is a definite push to only acknowledge individual cases and not look at the bigger picture. Unfortunately I don’t see this being resolved anytime soon.”
The issue was raised by councillors last Wednesday with Sinn Fein cllr Eoin Ó Broin, Independent cllr Francis Timmons and Labour cllr Breeda Bonner all tabling questions and motions about the issue.
Cllr Timmons said: “No family should have to live in damp conditions, the area of Balgaddy has also be starved of amenities and services and hopefully the council will step up and resolve the many issues in Balgaddy and other areas.”
Last week the council agreed to carry out a report and a “re-examination” of remedial works that have already been carried out.
A report from the council stated: “Originally when constructed some of the phases did have defects in a number of windows and doors as well as some roofs. There was also a limited issue with fire separation in a small number of units.
“Following a number of complaints in relation to leaks in the apartments the council carried out a full survey of the entire development and also used two other surveys that were carried out in the area by the Partnership Company and a Voluntary Housing Body. As a result of these surveys a small dedicated unit along with a Clerk of Works was allocated to remedy each and every identified fault as well as responding to every request for maintenance.”
The council also confirmed that maintenance requests in the Balgaddy area are “below the average” for an area of this size.
Despite this a number of complaints have been made recently in relation to dampness and mould in specific apartments and as a result the issues will be raised with the county architect and environmental health officer for the area.