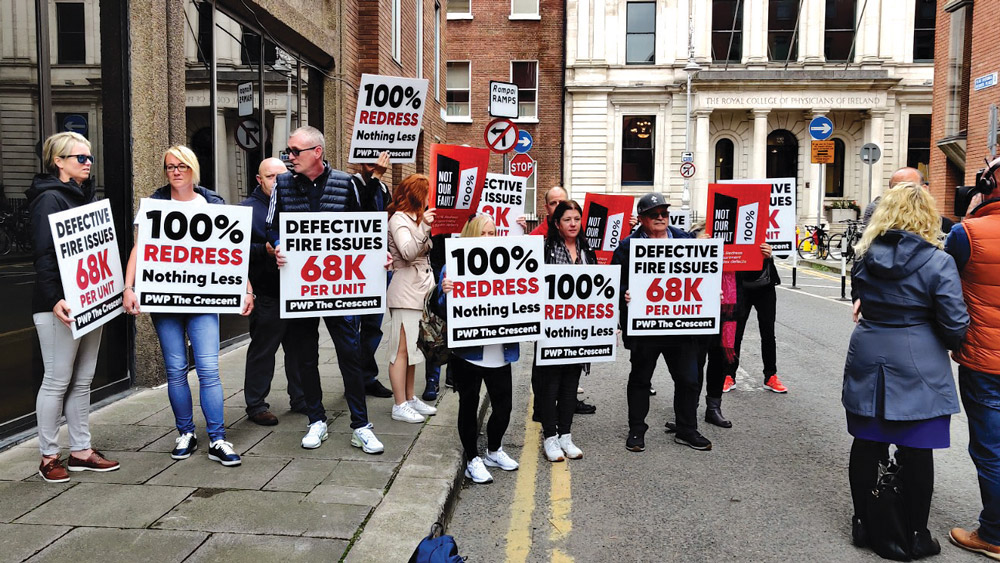 Costs of €68k face owners of apartments to remedy defects

APARTMENT owners are facing a cost of over €68,000 per unit to fix fire and safety defects at their Celtic Tiger-built complex in Park West.

The Crescent Building, which comprises 10 blocks of 257 apartments, was built by a third-party contractor in 2003, as part of the larger Park West campus developed by Harcourt Developments.

At a recent AGM via Zoom with management company Keenan Property Management (KPM), owners were informed it was going to cost €68,500 per apartment unit, with the first instalment of €15,000 due before the end of this year.

Last year KPM – acting on behalf of the owners’ management company (OMC) – informed residents of the result of a fire-safety survey which found non-compliance with the fire-safety certificate in various parts of the building.

Costs to repair defects at the development were expected to total €5 million, but owners and residents alike, fear for their future.

One resident, who did not wish to be named, said: “With the first instalment of €15,000 due before the end of this year and the rest over the next five years, that works out at just under €300 per week.

“It was a complete shock to us all. We asked where should we get the money for this with the rising cost of living and already our properties in negative equity, and were told go to your local credit union. We have been threatened by the management company that if we don’t pay up the first €15,000 there is a threat of closing the building.”

Residents have been campaigning outside the Dáil and received support from TDs Paul Murphy (PBP/Sol), Eoin Ó Broin (SF) and Brid Smith (PBP), but the recent Budget failed to provide redress support.

“We were hoping they would broaden the scope of the mica and pyrite scheme to include defective apartments and duplexes, but they are talking about a new scheme that could take up to three years to set up,” said the resident.

“We need to be included. We all bought our homes in good faith and have been left with the costs through no fault of our own.”

The main defects relate to an absence of fire stopping material between apartments, on external walls and in the roof of the large apartment building.

It is understood owners were told that these issues account for around half of the overall costs while other work such as fire doors, evacuation routes and emergency signage account for the rest.

In a statement last month, the board of the OMC, of which all owners are members, said “the repairs are the fault of developers and builders cutting corners on safety and the government for allowing them to get away with it.

“The owners bear no responsibility for this but are being forced by the same government regulators to put right the mistakes of others.”

A recent Dept of Housing report suggested some 100,000 homes across the country may be facing similar problems.