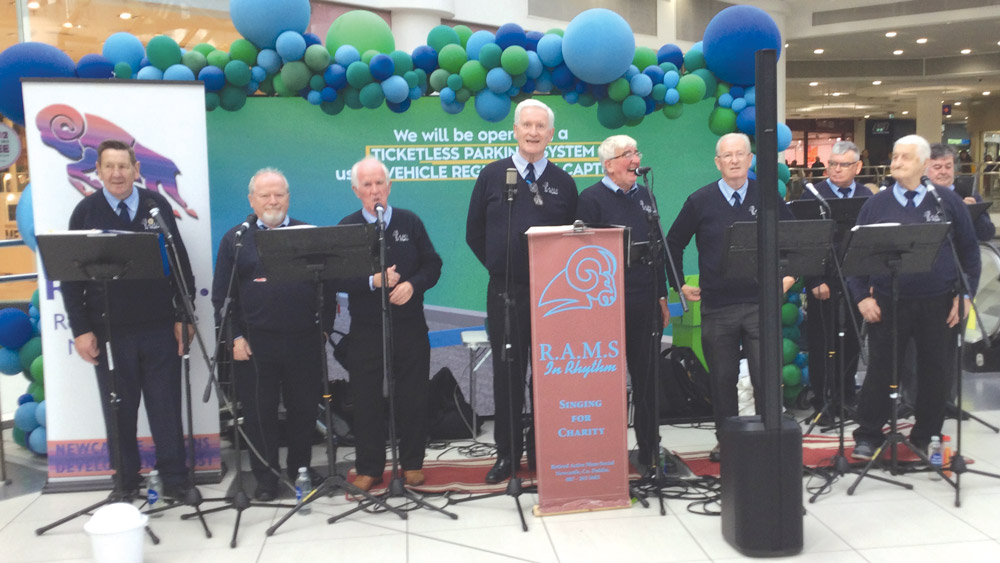 RAMS in Rhythm choir at The Square was in tremendous form

A €4,750 cheque was presented to Our Lady’s Hospice, Harold’s Cross, on Monday by members of the Retired Active Men’s Social (RAMS) choir, called RAMS in Rhythm.

The Newcastle-based group, which consists of retired men aged 75 and up, performed a varied repertoire to the delight of shoppers in The Square in recent weeks to raise funds for the hospice.

They performed in the busy shopping centre in both July and September, collecting €4,750 from generous shoppers and staff during their two well-received performances.

Matt Dowling, secretary of RAMS, said: “The singing in the Square was a real treat to all the patrons, shoppers and staff, not to mention all the schoolchildren who applauded us on each occasion.

“There was a wonderful atmosphere on Level 2, with many shoppers sitting around and enjoying the entertainment. Some even danced in the aisles.

“Our ten-man band was in tremendous singing voice, and the acoustics in The Square made the sound even better.

Not ones to rest on their laurels, the group has already started to record a CD of Christmas carols, which will be released just in time for the festive season.

In true RAMS style, the proceeds from sales of the CD will be going to charity, namely St Vincent de Paul, Down Syndrome Kildare, the Capuchin Day Centre and, of course, Our Lady’s Hospice.

The RAMS in Rhythm have also been invited back to The Square to bring some Christmas cheer with a performance on Friday, December 2 from 12 midday, all in aid of charity.

“Since the inception of the RAMS in Rhythm, we have donated in excess of €130,000 to various charities,” added Mr Dowling.