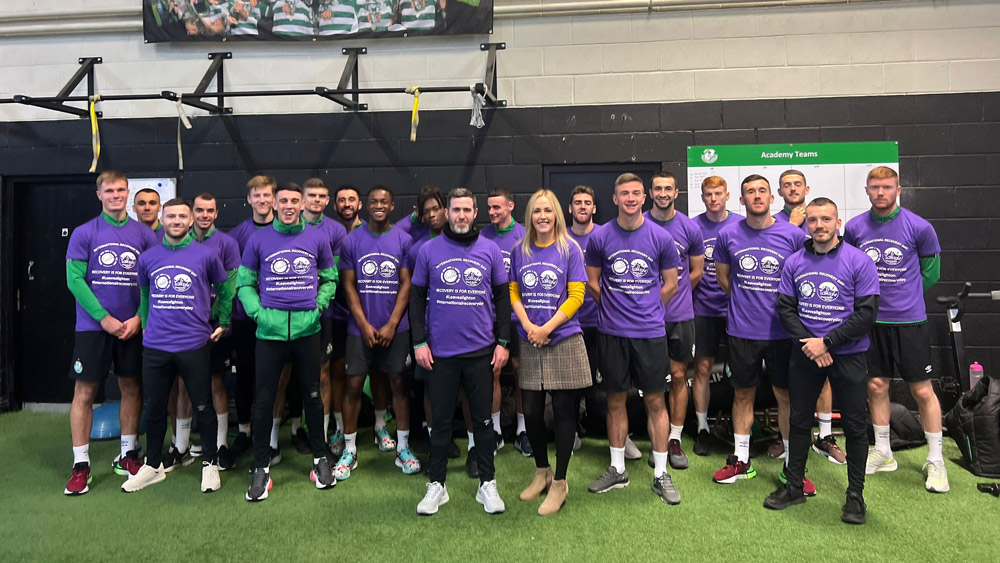 Grace Hill with Shamrock Rovers manager Stephen Bradley and players in Roadstone on Tuesday. The players wore purple shirts – which is the colour of Recovery Month – to show their support

Hoops players in five-a-side for Recovery Month cause

PLAYERS from Shamrock Rovers Football Club will line out alongside clients and staff from local drugs projects for a five-a-side tournament later this week to mark International Recovery Month.

The tournament, called the Recovery Cup, will take place at a pitch in West Tallaght for local drug project clients and staff to attend and participate in.

Shamrock Rovers outlined their commitment to supporting Recovery Month at an event in Roadstone on Tuesday, with manager Stephen Bradley and his team backing the cause.

The players wore purple shirts – which is the colour of Recovery Month – to show their support for the recovery community.

Grace Hill, coordinator of the Tallaght Drug and Alcohol Task Force (TDATF), said the team”s players serve as positive role models in the community and she has welcomed their support.

“One of the tools that our workers use to engage young people is football,” explained Ms Hill.

“They’ve been doing the street leagues in Killinarden and Jobstown.”

She added: “The players from Shamrock Rovers are positive role models for people in the area.

“There’s a huge amount of people that look up to them.

“They all put on purple T-shirts on Tuesday to show their support for Recovery Month and to support those who are impacted by substance misuse.

“It means a lot to have the backing of a team that’s doing so well but has never forgotten where they’ve come from.”

Between eight to ten teams will be fielded on the day, with professionals from football and drug projects, and people who are in recovery, sharing the pitch and competing to win the Recovery Cup.

“There’s a huge amount of doom and gloom around the drug issue,” added Ms Hill, “but Recovery Month is so positive and it’s building year-on-year.”

In terms of public events, there will be a Recovery Walk today, Thursday, September 29, from the Tallaght Rehabilitation Project in Jobstown to Cushlawn, starting at 11am.

The following day, Friday, September 30, the end of Recovery Month 2022, will be marked by a number of local buildings lighting up purple to show their support for people in recovery.