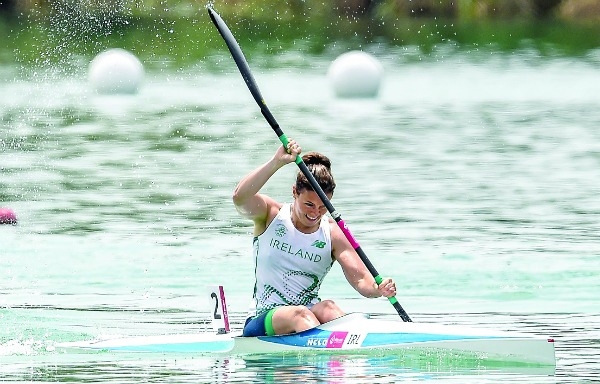 LUCAN canoeing star Jenny Egan is entering a critical phase in her bid to secure qualification for this summer’s Olympic Games in Rio.

The talented athlete has just returned from a seven-week training camp in Florida where she clocked up over 120 hours training in preparation for two key competitions.

Jenny is also hoping that her ambition to achieve her Olympic dream will inspire Ireland’s next generation of leaders and champions to join her as a Nissan Generation Next ambassador.

Jenny took time out of her busy schedule this week to launch Nissan Generation Next 2016 and is encouraging anyone who is ambitious and working hard to achieve their dreams to apply at online at www.nissangenerationnext.ie.

Her Nissan Qashqai will also be used to transport her canoe to her next big competition in Nottingham in England on April 9th and 10th. The regatta will determine selection for the Irish national team ahead of the European Olympic Continental Qualifier in Duisburg, Germany on 18th and 19th May.

“Everything rests on the next seven weeks. Nottingham is the first race of the year and that should sharpen my race experience. All going well there it is on to Duisburg which is going to be extremely tough,” Jenny explained.

“I will be competing in the Women’s K1 200 metres and 500 metres events with the latter being my strongest of the two. Duisburg is my main goal and my training is based on peaking for it and being in the best shape possible to qualify for Rio,” she added.

Jenny maintained a punishing training regime at her training camp in Indian Harbour Beach outside Orlando in Florida with her daily routine including up to five hours training with two sessions on the water and one in the gym.

“I was training on the aptly named Banana River with international teams, including the Danish’s women’s team.

“There are some phenomenal girls of that team including world champions. It was a bit like boxing where you have a sparring partner. You push each other to make each other faster,” she explained.

“I was on the water each day at 8 a.m. for an hour-and-a-half, followed by two hours in the gym and then another afternoon session on the water for an hour and a half. It was quality training and I am very pleased about my condition looking ahead to Nottingham and Duisburg,” she added.

Nissan is encouraging tomorrow’s leaders and champions to follow Jenny’s lead in applying to join the Nissan Generation Next ambassador programme.

“We are looking for people like Jenny who are confident, focused and passionate about what they do in life and who could use a brand new, taxed and insured Nissan to help them achieve their goals,” explained James McCarthy, CEO of Nissan Ireland.

“Nissan Generation Next ambassadors exemplify what it takes to make it on the national and world stage. They forge ahead with tenacity and determination and their ability to focus on what they want to achieve and to overcome the obstacles and challenges that they encounter is truly inspirational,” he added.

Applicants for the 2016 Nissan Generation Next ambassador progamme can apply online at www.nissangenerationnext.ie