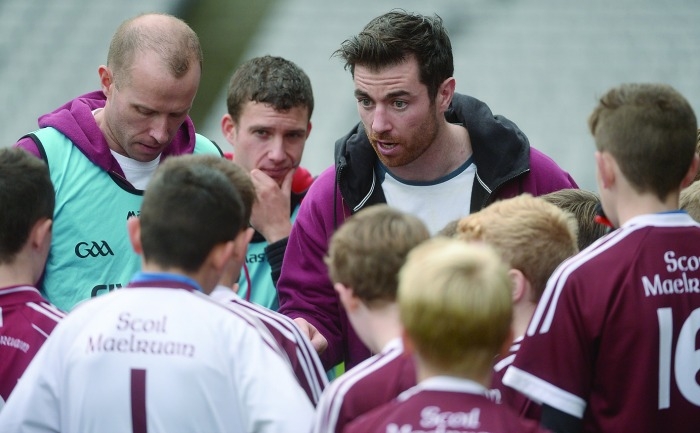 The latter raised the prize after a pulsating encounter with Scoil Mobhí of Glasnevin in which they edged 1-10 to 0-9, the game swinging like a pendulum throughout the entire 50 minutes of play.

The Old Bawn side led by one point at half-time thanks in no small measure to a brilliant goal by Callum O’Brien.

It was to prove O’Brien’s last action of the match as he was forced to retire injured soon afterwards. Fionn Lynch played a captain’s role, scoring six points and setting up a few more.

Other scorers were Kai Young, Steven Fox, Aaron Connolly and Dean Layton (0-1 point each) while at the other end of the pitch the team was also helped by superb defensive displays from Darragh Lacey, Denis Ogbonna and Daragh Stevens.

The Scoil Maelruain girls meanwhile recorded a thrilling 2-7 to 0-9 victory over Mount Anville in their respective decider.

The Tallaght side got off to a fantastic start when full forward Leah Blair smashed the ball to the back of the net with her opening effort.

Aimee Collins followed with a super point added to by another from Blair.

Mount Anville then put their first score on the board as Maelruain’s found themselves under real pressure and were forced to rely heavily on some brilliant defending by Anna Lambert and Jessy Barry to keep their opponents at bay.

Neverthless Mount Anville enjoyed a purple patch late in the first half, hitting five points without reply, but Abigail Perry and Leah Blair responded with a point each just ahead of the whistle to leave just one point between the sides at the break.

Mount Anville started the second half with two quick points only for Blair and Collins to respond in kind.

Sarah McEvoy was winning the battle in midfield and Jade Riordan was winning some brilliant ball in the half forward line.

The Maelruain girls were awarded a free kick near the side line after the tenacious Georgia Mann-ing was pushed to the ground.

Up stepped captain fantastic Aimee Collins to direct her shot perfectly towards the middle of the posts before seeing it drop into the goal. From the kick out Mount Anville went down and scored a point which left only a goal separating the sides.

It was a fantastic day as it marked the first time ever that both the boys and the girls were victorious in Croke Park.