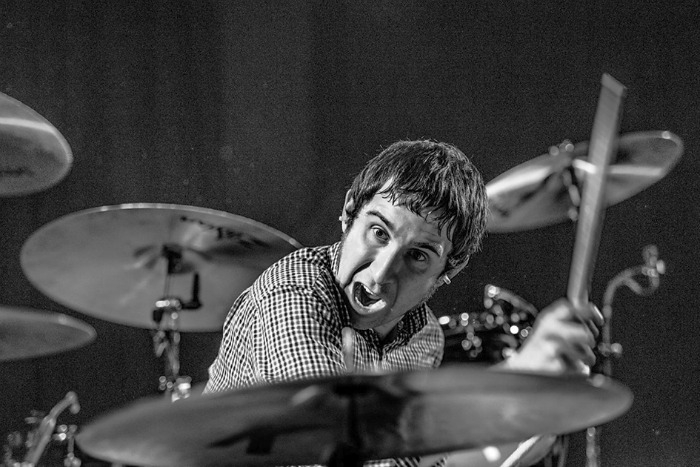 New Urges record worth the wait

IT’S been nearly a decade since psychedelic rock and roll band The Urges last released an album.

However, the lads are back on track and have just released a new album called Time Will Pass, which they’ve said is a little more grown-up and melodic.

One of the three original members of The Urges, which formed around 12 years ago, is Kilnamanagh drummer, Ken Mooney (28) – whose been tapping away to the like of The Beatles, The Kinks and The Crickets since he was a kid.

A former student of Tallaght Community School, Ken has collaborated with a number of other artists and bands over the years and has also done some solo work.

Just as the new album launches, Ken took five to speak with his local paper.

What’s the first album you ever bought?

The first album I bought, well actually was given to me by my folks was a Very Best of Buddy Holly album on cassette when I was very young. I was obsessed with Buddy Holly and The Crickets as a kid and I still love them. I still listen to Buddy a lot.

What age were you when you first picked up a drum stick?

I was always tapping away as a kid along to The Beatles, The Crickets, The Kinks and stuff like that, and then I seen Keith Moon with The Who on video and was obsessed! I knew that’s exactly what I wanted to do and I bought my first kit from Tallaght Music Store out of my confirmation money shortly after that.

Why drums over any other instrument?

Well I played guitar first and enjoyed it but I was just more drawn to the drums and focused more on the drummers in the bands that I was listening to.

The Urges has just released their second album, Time Will Pass, tell us a little bit about it?

We spent quite a bit of time writing and recording this album. The first album was done quite rough and ready and on this one I guess we wanted to have a bigger and more melodic sound. We were trying to achieve what we were hearing in our heads. We added string arrangements, brass lines and four part harmonies to the songs and spent a lot of time going back and honing in on the little things to get the sound just right.

How does it differ to Psych Ward, the album you released in 2007?

With Psych Ward, at that time we were a much rawer garage rock’n’roll band and there was a different line up at that time too. Around 2010 or so there was a couple of member changes and we started to develop a newer more melodic sound I guess you could say, where as before it was a much more in your face kind of thing which was grand at the time but I think as we’ve grown up we’ve just broadened our sound and added more instrumentation.

We love The Stones, The Kinks, The Doors, and bands like that but a lot of the bands sound is heavily influenced by a lot of the lesser known bands from the 60s. Bands like Love, West Coast Pop Art Experimental Band, 13th Floor Elevators, Mighty Baby, David Axelrod. There’s a compilation with lots of gems from that era called Nuggets…which we call the bible! We love a lot of instrumental soundtrack stuff from the 60s/70s too.

What inspires the lyrics?

Jim our frontman takes care of the lyrics in The Urges so hard to say exactly what influences him directly but we like a lot of the existentialist writers like Albert Cams and Jean-Paul Sarte so I think that has an influence on the lyrics.

Are you listening to any new, Irish, bands at the minute? Any recommendations?

Yeh there’s tons of great bands in Ireland at the moment. Exploding Eyes, This Other Kingdom, Freedom 45s, Late City Edition, Girl Band, Buffalo Sunn, The Revellions, The Young Folk, The Hot Sprockets, Anderson to name just a few. There’s loads out there playing all the time, Irelands full of amazing musicians and songwriters.

If you could play drums alongside any artist or band, living or dead, who would you chose and why?

That’s a hard one. Playing alongside Buddy Holly as a Cricket would be pretty amazing or in Paul Weller’s band because I’m a big fan of his or taking Ringo’s place in The Beatles. Ah it’s way too hard to choose just one!

What’s your favourite lyrics out of any song ever! Why?

That’s another hard one but it’s probably something by either Bob Dylan or Ray Davies from The Kinks. I think they’re both genius, I love the imagery in their songs. Again too many to choose but I love Dylan’s It’s Alright Ma (I’m Only Bleeding)…. Disillusioned words like bullets bark, As human gods aim for their mark, Made everything from toy guns that spark, To flesh-coloured Christs that glow in the dark, It’s easy to see without looking too far, That not much is really sacred.

What’s next for the Urges?

Next up is we’ve got a few dates around the country through November and December and then in the New Year we’ll head back over to France and Italy for a tour. We tend to go there quite a bit as they really like the band over there. We’ve some new tunes already in the pipeline too so we’ll get them recorded in the New Year.

How can people get their hands on the album?

You can get the album in Tower Records or any of the independent record stores in town and you can buy it on vinyl or CD.

You can also download it from the usual spots, iTunes and all that jazz or you can buy direct from us online through our Facebook page, where you’ll also find out where we’re playing. We’re on Instagram and Twitter too…all that hip stuff, haha.