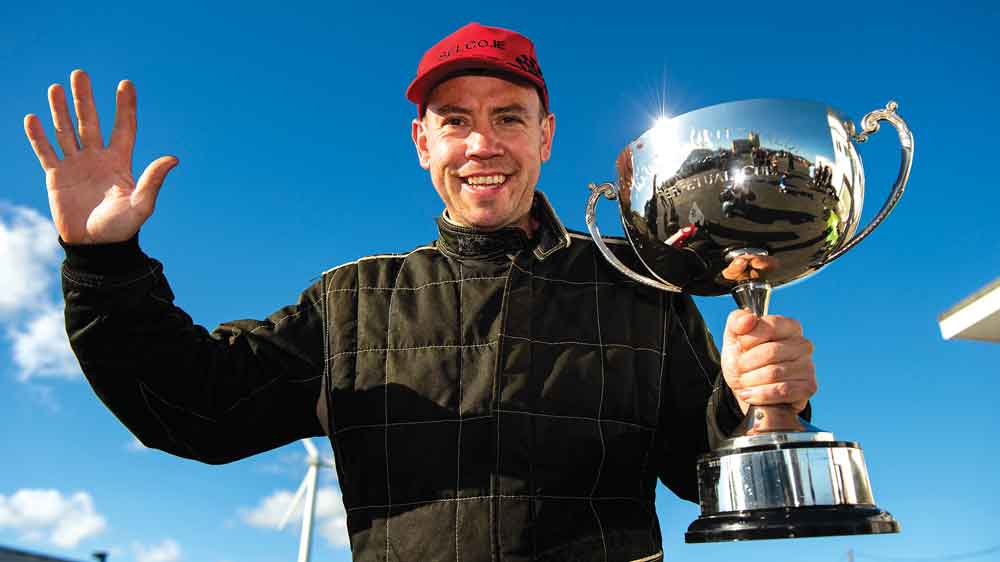 BOHERNABREENA’s Anthony Cross rounded off another memorable Irish motor racing season with a double success at the Kirkistown Racing Circuit in Co. Down last month.

Already crowned the Selco.ie Formula Vee Champion as a consequence of finishing runner-up to Owen Kelly during a previous meeting at Mondello Park, Cross was determined to end the latest campaign in fine style.

He managed to do just that by not only winning the final leg of the Formula Vee series, but also coming away with the Emerson Fittipaldi Trophy in his second race of the day.

This brace of victories ensures the Tallaght man will finish 2022 with three pieces of silverware, following his Holmpatrick Trophy triumph earlier in the year.

Speaking to the Inside View 83 blog in the aftermath of his outstanding performance in Kirkistown, Cross said: “They were two great races today. I’m delighted to have won both and I was pushed hard all the way.

“I thought the second race was going to be a copy of the first between me and Jack [Byrne], but he got caught up battling with Gavin [Buckley] and I got away for a while.

“I was getting really bad understeer into turn three and lost time, but I’m glad I got to hold on to take the win.

“Thanks to all the class sponsors and to my Dad for his help all year.”

In securing this season’s Formula Vee crown, Cross has become the first driver to win the title for a fifth year in succession.

While Dundalk man Brian Hearty has won it six times, there were gaps between some of his successes.

Despite having already claimed the prize that he had set his sights on at the beginning of 2022, Cross was still determined to sign off on a winning note.

In addition to the aforementioned Jack Byrne, he also found himself coming up against former champion Dan Polley and prodigious Kildare native Donal Downey in his first event of the day.

In the early moments on the Kirkistown track, Cross was behind Byrne in second with Polley and Downey also keeping up the chase.

Although the latter duo proved themselves to be powerful challengers, it was Cross and Byrne who were becoming the clear favourites in the race for top spot.

In the course of a single lap, the lead changed hands on three occasions in total.

This trend continued as the action progressed, though Byrne was in the ascendancy at the halfway mark and remained out in front for the next couple of laps.

Cross persisted with his challenge, however, and in a drag race towards the finishing post he eventually came through by 0.005 of a second.

Having built confidence as the race developed, it was Gavin Buckley who ultimately came home in third.

There was the same order on the podium for the Emerson Fittipaldi Trophy race – named after the former Formula One world champion from Brazil – with Cross holding firm to complete a clean sweep of major crowns ahead of Byrne and Buckley.