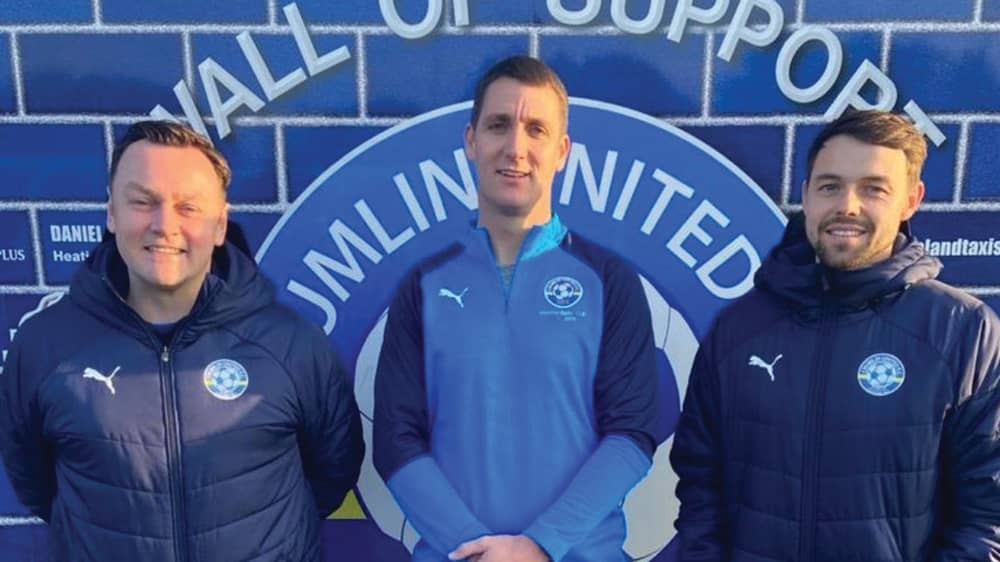 CRUMLIN United are continuing their preparation for the start of a new chapter since the departure of former manager Martin Loughran, with new team boss James Lee adding to his backroom staff.

Bolstered by the additions of Graham Cassin as Director of Football and Ed Saul as first team coach, this new era for Crumlin appears full of promise.

Crumlin United’s Graham Cassin, Director of Football, James Lee, Manager, and Alan Barrett, Coach, are all gearing up for a new season

Cassin originally came into the Crumlin United senior team as a coach alongside Loughran last May and has remained in the position after Lee took over in November.

This week, Cassin moved into the Director of Football role and Saul replaced him as part of Lee’s backroom team.

“It is exciting times for Crumlin United,” Lee tells The Echo.

“I feel like bringing in Graham Cassin as Director of Football was badly needed.

“Graham came in for 13 games with Martin Loughran as head coach and he remained on with me until this week.

“He was over in England with Blackburn and he’s been around, he’s the right man for the job and a fantastic asset to the club.

“Ed Saul has come in with me then to replace him.

“He has a great reputation around the game and I’m looking forward to working with him.

“His son joined the club and he’s been involved with the schoolboy set up since then.

“The modern game is changing so much and he has great fresh ideas.”

Saul is an accredited UEFA ‘A’ licence coach and comes into the Crumlin set-up having coached Shamrock Rovers Under 17s in recent years.

Likewise, Cassin is also a UEFA ‘A’ licence accredited coach, which is something Lee has his sights set on obtaining in the near future.

Bolstered by former player Alan Barrett as a coach, Crumlin are on a sound footing heading into the new season.

“These are very highly skilled and highly trained lads and hopefully we can pick up and carry on from what Martin [Loughran] has built over the last 20 plus years,” added Lee, who is a Collinstown native.

Aside from a year with Lucan United, Lee has played for Crumlin for the past 13 years, captaining the side in recent seasons and has been capped by the Republic of Ireland amateur national team.

Crumlin have yet to kick a ball this season as a result of the COVID-19 pandemic, but hope is on the horizon.

The Leinster Senior League stated this week that it intends to “start league football four weeks after the reintroduction of full contact training” and so are targeting a June/July start.

The prolonged time on the sideline is something Crumlin are trying to make the most of.

“I think I had four weeks with the players before everything was shut down in lockdown,” Lee says.

“A lot of the lads are my former teammates as well you have to remember, so the transition [since taking over for Loughran] hasn’t been too bad.

“We’re trying to keep the lads going in the WhatsApp group, getting them out doing 5k runs and that.

“But it dies off after a while, you can only do a certain amount of five and 10k runs on your own.

“It’s a really tough time and it’s difficult to stay on top of things, this must be the longest stretch of no games there has ever been.

“Look, all we can do is keep chipping away and hopefully we can get back out on the pitch soon”