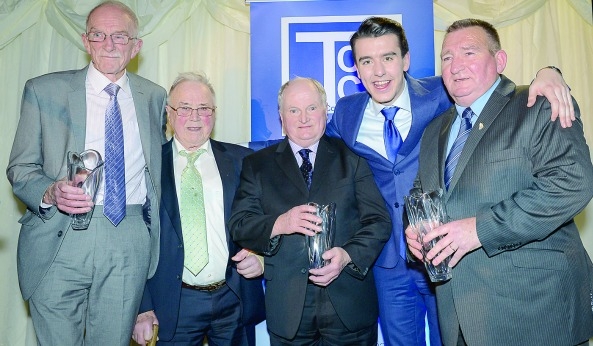 DECADES of community spirit and volunteer efforts were recognised alongside one of Tallaght’s newest and fastest growing community groups during the 32nd Tallaght Person of the Year Awards.

Special merit was given to five people at the gala night, with Tallaght’s best-known faces rewarded for their community efforts throughout the years.

Glenview resident Sean Lambe’s fundraising efforts by taking part in 100 marathons were given merit, along with achievements of bee-keeper and retired sexton Benny Myers from St Maelruan’s Park through his talks to individuals and groups over the years.

Producer Jack Collins from Piperstown was recognised for the stage productions he has held in Glenasmole and Bohernabreena, and the countless hours spent with members of Tallaght Athletics Club by St Maelruain’s athletics coach Johnnie Fox were also acknowledged.

Founder of V.I.S.I.T. homeless support, Nicola Moore from Killinarden, was awarded a merit for her work helping the homeless since the group was founded in 2014.

V.I.S.I.T. has served 4,500 hot meals and raised €5,000 for CARP, the addiction service in Killinarden. A community-led soup kitchen, V.I.S.I.T. provides hot food and support and warm clothing to Tallaght’s homeless from the grounds of the Priory.