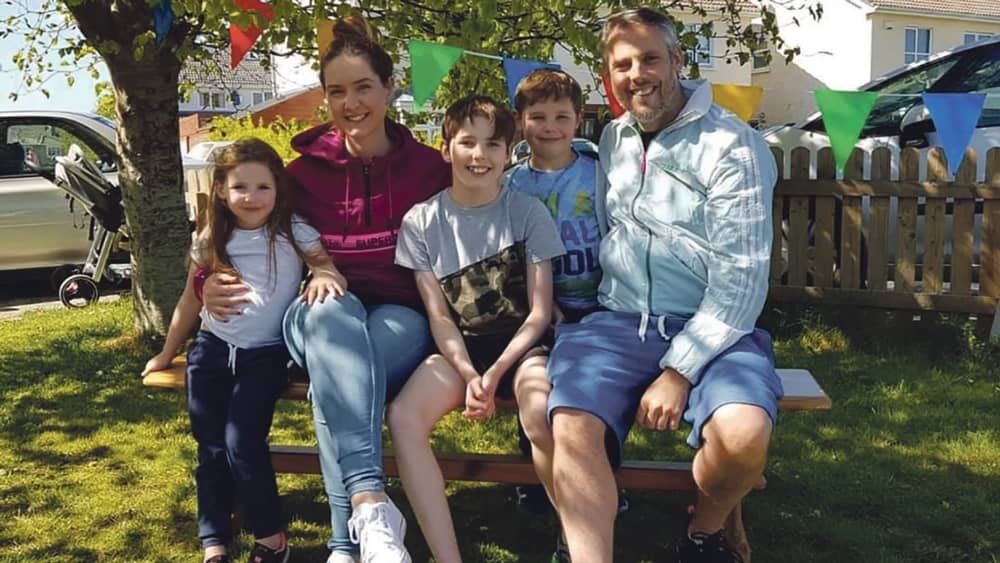 Dedicated father Brian had a passion for music and driving

THE family of a young man who died on Easter Sunday are remembering him as a dedicated father, husband and son with a passion for music and driving.

They’re urging people who may be struggling with their mental health to seek help.

Brian pictured with his wife Laura and children Josh, Jamie and Jenna

Brian Kelly, 41, who grew up in Kilnamanagh as the youngest of three siblings, had a strong work ethic that saw him getting up early to assist the local milkman on his rounds before setting off to school at St Kevin’s Boys’ School.

As he grew up, one of his key passions was music – one of his first concerts was an Oasis show in the Point in the 1990s – and he regularly DJ’ed.

Brian also enjoyed driving and worked as a lorry driver for Chemco up to his death.

He met the love of his life, Lucan woman Laura O’Donoghue, when he was in Australia in the late 2000s, and they moved back to Ireland and settled in Lucan several years ago.

The couple got married and had three children, Josh, 12, Jamie, seven, and Jenna, six, who adored their father.

Explaining what his son was like, George Kelly said: “He was a joker, he was the life of the party. At his wedding, after the band had stopped playing, he did an hour of DJing.

“If I put on a record, he could tell me just from hearing the first few notes what the song was.”

Brian had a wide circle of friends, with whom he held fundraisers for suicide and self-harm prevention charity Pieta House, and he regularly took part in the charity’s annual Darkness Into Light event.

Brian with his dog Ned

His family said that there was no indication that he was struggling with his mental health, and that his death by suicide has been a “heartbreaking” situation for them to grapple with.

“We can’t understand the circumstances, no one understands what happened,” explained George.

“It shouldn’t be a father and mother burying their son – it should be the other way around.”

Brian’s funeral was held in Cunninghams Funeral Directors in Lucan on Saturday, April 10 with an escort provided by Laura’s colleagues in An Garda Síochána.

“The funeral was incredible,” added George, “there was a strong showing of support from his friends.

“His neighbours decorated the railings where he lived with balloons, and as the funeral procession went by, they released balloons for him.”

Brian was buried in Newlands Cross Cemetery, and George added that Brian’s friend Rob Hendron delivered a moving eulogy at the graveside that “had us in tears of joy and tears of sadness”.

Members of An Garda Síochána formed a guard of honour as the hearse travelled to the graveside, and a convoy of trucks from Brian’s employer, Chemco, sounded their horns for a few minutes as the hearse turned into the graveyard.

After prayers and a decade of the rosary were said at the graveside, the mourners began singing ‘You’ll Never Walk Alone’ as Brian’s coffin was lowered.

“It’s devastating,” said George, “we’re broken. His friends said he was always the one who would call them to see if they were OK, but he never told them that he wasn’t.

“Brian should’ve talked to us about how he was feeling. I just can’t understand why Brian didn’t talk to me, or his friends or the Samaritans.

“It’s a mystery that will stay with us, and we’ll never get over it.”

George spoke to The Echo about Brian’s life and tragic death as he wants to highlight that there is help for people who are struggling – and he doesn’t want another family going through what Brian’s loved ones are enduring.

“If someone is struggling, they should just talk – tell someone, either in person or at the end of the phone,” he said.

“You’re not on your own, there are people there who will help. Don’t hide how you’re feeling.

“My hope by talking about this is that it might prevent another family from being in the situation we’re in today.”

George wanted to extend his thanks to neighbours in Lucan and Kilnamanagh, Brian’s colleagues in Chemco, his DJ friends and Laura’s colleagues in An Garda Síochána for their support.

Brian, beloved husband of Laura and dear father of Josh, Jamie and Jenna, passed away on April 4.